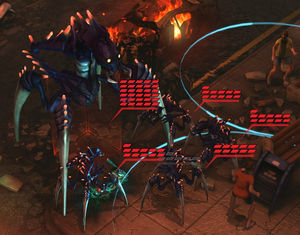 A Chryssalid squad leader compared to its smaller brethren.

Much like in vanilla, Aliens deploy in "pods", which are "activated" by seeing them. Unlike in vanilla, alien pods are frequently made up of several different types of aliens, such as a Thin Man leading some Sectoids, or some Mutons with Floater scout.

Each "pod" will be led by one Squad Leader alien, possessing both improved stats and new abilities. Each leader has a chance to be accompanied by a Navigator alien in addition to its other pod-mates which usually acts as a scouting unit of sorts, often possessing perks suitable for this role. Squad leaders can easily be identified by their larger health pool and increased physical size.

All pods now make noise when they move, but some pods will choose to lurk rather than patrol. The percentage of pods that hide out in this fashion is different per mission - on Abductions, it is 50%, on Large UFO's, 40%, and on small UFO's, 10%.

The aliens will continually improve their technology as the war goes on, which will grant them extra stats, HP regen and in some cases unlock new abilities. Squad leader and navigator perks are unlocked in the order in which they have been recorded here. Please note that the maximum stats for each species listed below can only apply to squad leaders of that species with all possible upgrades. Abilities tagged with an asterisk(*) are only unlocked on regular aliens during later stages of the war.

Disclaimer: The "Appears" Month listed for each Alien is the month it would appear it normally with a time-only based Alien Research progression. Bonus Research from outside sources (e.g. Alien Bases, XCOM Soldiers left behind on failed missions, etc.) may cause some of these Aliens to appear during a month ahead of their schedule. In addition, Landed UFOs present the possibility of Aliens one (1) month ahead of their standard schedule during that mission.