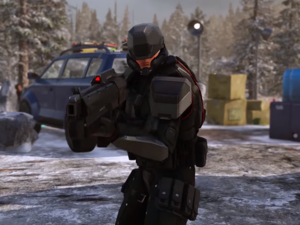 ADVENT Troopers are the most common ADVENT soldiers deployed within XCOM 2, first appearing at the beginning of the game and continuing to appear throughout the entire campaign as the basic first-response unit of ADVENT.

Supposedly once human volunteers, ADVENT Troopers are revealed to be hybridized with alien DNA, giving them undeniably inhuman facial features and orange blood; with their faces concealed by carefully-designed helmets, they pass for human among the city population. Equipped with gray-black armor and a high-powered magnetic rifle, ADVENT Troopers are a common sight inside and outside ADVENT-controlled areas.

ADVENT Troopers will perform basic tactical movements such as flanking, covering one another, and firing on targets of opportunity. Unlike other ADVENT specialists such as the ADVENT Captain or Shieldbearer, more than one Trooper can appear in a patrol. Later, Advanced and Elite Troopers will be equipped with grenades, using them whenever the opportunity presents itself.

ADVENT Troopers fulfill the role of the standard footsoldier for ADVENT, though with their unimpressive stats, they are easily taken out when alone; however, ADVENT Troopers will never be alone, often appearing with ADVENT Officers or MECS, and occasionally with aliens such as the Viper or Muton leading them.

As opposed to the Sectoids of the original invasion, ADVENT Troopers will receive upgrades as the campaign progresses; they will be upgraded to Advanced Troopers at first, then Elite Troopers, being granted more HP and more damaging weapons throughout.

Early ADVENT Troopers have an average Aim stat of 65, often missing XCOM soldiers in high cover and occasionally missing those in low cover, but when appearing with an ADVENT Officer, they gain +10 Aim towards a Marked soldier, and focus fire towards that soldier, often leading to an XCOM death.