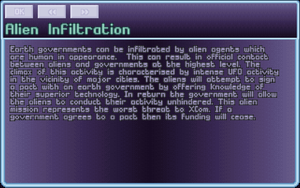 This Alien mission represents the worst threat to X-COM. Earth governments can be infiltrated by Alien agents which are Human in appearance. This can result in official contact between Aliens and governments at the highest level. The climax of this activity is characterised by intense UFO activity in the vicinity of major cities. The aliens will attempt to sign a pact with an earth government by offering knowledge of their superior technology. In return, the government will allow the Aliens to conduct their activity unhindered.

If a government agrees to a pact then its funding will cease. If successful, the aliens will score 150 points, and an alien base will also be constructed which generates daily activity points, which are eventually subtracted from your score.

Initially, several Scouts will perform investigations prior to the main infiltration attempt.

In the main Infiltration wave, a Large Scout will appear, followed by a Terror Ship, Supply Ship and two Battleships. It has been shown that shooting down any of these craft before they slow down will delay the next craft by a couple of days; if the craft are ignored even for a short while, long enough to slow down, the sequence proceeds extremely quickly. It has been conclusively shown that shooting down the UFOs or assaulting the landed ships will NOT stop the infiltration from succeeding. Shooting down the earlier ships will delay, but not entirely stop the second Battleship. The moment the second battleship appears in Earth's atmosphere, the infiltration is successful and complete. If the month ends before the second battleship arrives, the infiltrated country will still fund the project normally.

When a country is successfully infiltrated, an alien base will be instantly created in or near the country. Always search for the alien base after the second Battleship. And once you know that the base is there, you have several options available to you.