UFOs are sent out periodically to conduct a number of types of Alien Missions, some of which the purpose is fairly inscrutable, others are fairly obvious in their reasoning. Especially once the Hyper-wave Decoder is deployed, knowing the mission of the aliens can help make strategic plans for further actions that the aliens may attempt in the near future.

The information presented below describes how Alien Missions work in the original Enemy Unknown game, based upon OpenXcom's XCom1 ruleset file and other sources, namely posts at OpenXcom's forums and pages about the original game files.

Keep in mind that there are massive spoilers involved, so read at your own risk.

The aliens will generate new missions each month according to the following pattern:

Once a particular mission is selected it will be removed from the array and won't appear again for that region. If all of the missions in the array are used then the game will restart this process and refill the mission array, usually somewhere around 2000. (this is unique to openxcom, and didn't occur in the original)

First the game will randomly choose a region for the mission, using weighted factors (defined on the ZONAL.DAT file in the original game and in Regions on the XCom1Ruleset.rul file) to influence the probability of each region being selected:

The 3 last regions don't have any random missions assigned and they won't see any Alien Terror missions since they have no cities present. However, it will be possible to see Alien Retaliation missions if any UFOs are shot down over those areas. This is because the target region for the retaliation is randomly picked between the UFO's mission region and the intercepting craft's point of origin. In the event that the interceptor's point of origin was one of these regions, a nearby region may be substituted in. Original handling would default the region to North America.

As said above, each region has several missions assigned. The mission will be randomly selected also based on weighted factors (defined on ACTS.DAT and in Regions on the XCom1Ruleset.rul file), which are shown on the table below.

The information on the table can be used together with any Alien Activity shown on the game's Graphs to make an educated guess on what the aliens are up to in certain areas. For instance, alien activity in Northern Africa, Arctic, Antarctic or the Pacific have a higher chance of an Alien Base being established on those regions.

Finally, the race of the aliens present for each mission will be randomly selected according to their Alien Appearance Ratios. In the XCom1Ruleset.rul this can be changed under Alien Missions, on the raceWeights subsection.

Each alien mission will consist of a wave of several UFOs, each of a specific type and with a particular flight pattern. The type and number of UFOs and the time interval between them are defined on the MISSIONS.DAT file (original game) or under the Waves subsection of the AlienMissions section of the XCom1Ruleset.rul file.

The UFO trajectories are used by the game to determine the actual flight path of the UFO, as well as their speed/altitude and any possible landings and time spent on the ground. Each UFO trajectory has the following attributes:

The following sequence of images shows a Large Scout on a Terror mission with a P1 trajectory as it moves from one waypoint to the other. 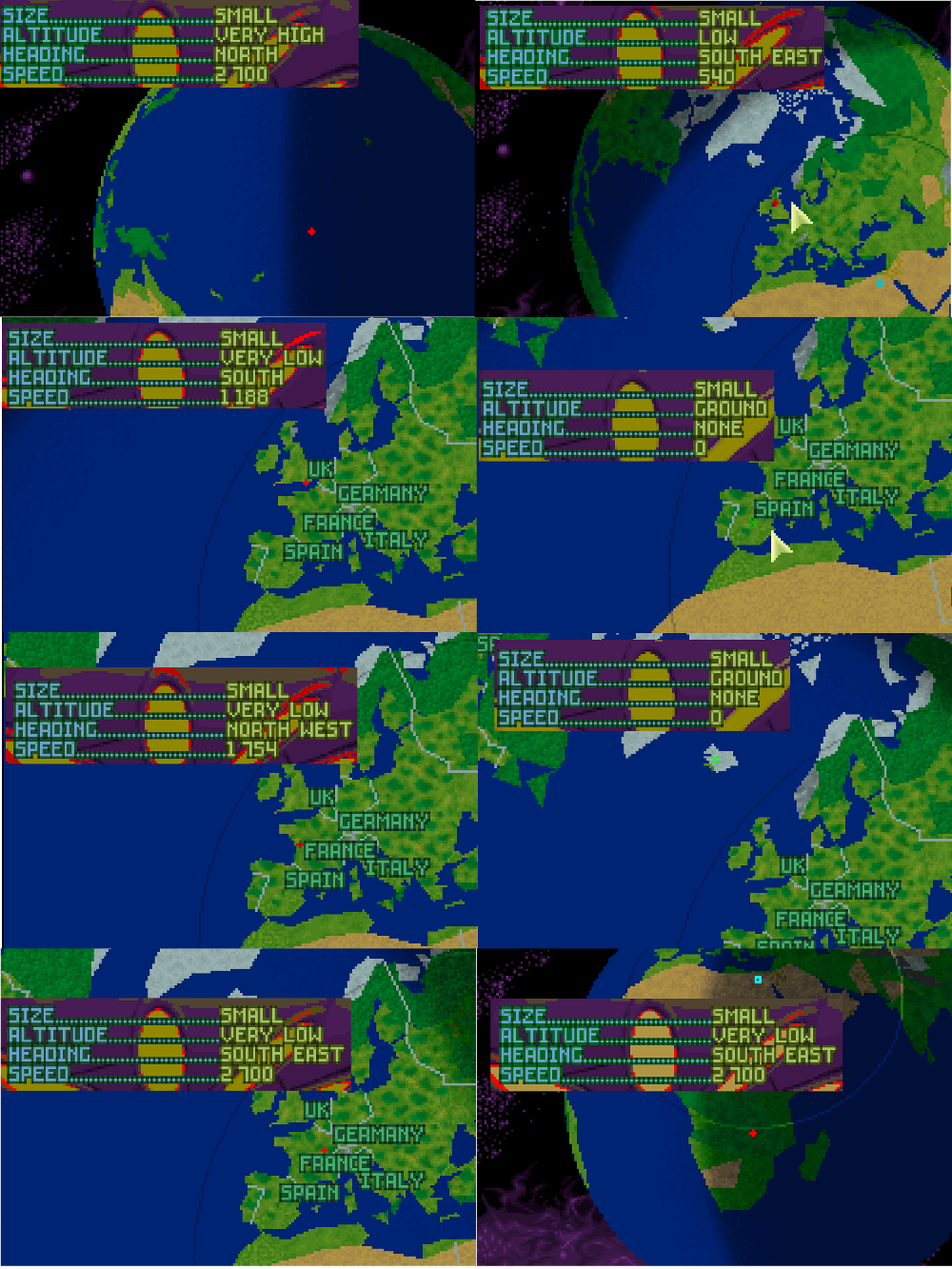 Finally, each region can have up to 6 types of Mission Zones, defined under Regions, corresponding to different areas on the map. Each type serves as a specific role:

As an example, this image displays the Mission Zones for Europe.

It is possible to see the Mission Zones for all regions using Falko's WorldEditor.