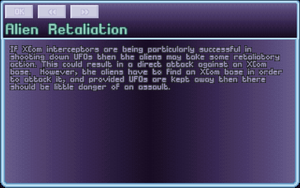 If XCom interceptors are being particularly successful in shooting down UFOs then the aliens may take some retaliatory action. This could result in a direct attack against an XCom base. However, the aliens have to find an XCom base in order to attack it, and provided UFOs are kept away then there should be little danger of an assault.