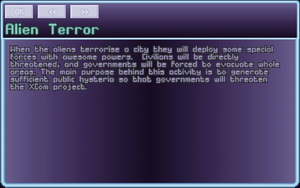 Usually aliens send a ship to scout the area for a city in preparation for a terror attack. Shooting down or assaulting the craft may either interrupt or delay the arrival of the terror ship. Once the terror ship arrives, it will head toward the targeted city and conduct a terror attack there, unless it is shot down.