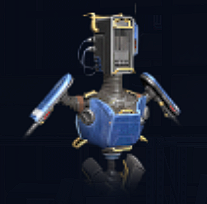 Androids are one of the new features of XCOM: Chimera Squad. After completing the Android Personnel project (the first available project, 10 Elerium, 2 days) you will receive the first Android for free - it will be located in the Armory together with agents. You can buy more Androids from the Supply for 150 Credits, but you can have a maximum of 2. Androids cannot be assigned to APC, Assembly, Spec Ops, or Training. Instead, they always accompany your squad to Missions.

Due to their Mechanical Chassis, Androids are immune to fire and poison damage.

Androids, unlike agents, do not have to be manually selected for each Mission. They automatically accompany agents in all Missions and appear on the Mission preparation screen. Unlike agents, Androids can be destroyed by enemies, but you don't fail the Mission if this happens.

You can't control Android from the very beginning of the Mission. Android can join the combat only if you lose an agent during an Encounter, that is, if a situation occurs in which the agent starts Bleeding Out, meaning they must be Stabilized (otherwise you fail the Mission) and will not be able to take part in further Encounters. If this happens, Android will be able to replace a lost agent. Android will take part in the Encounters until the end of Mission.

You should decide to buy an Android if:

Androids cannot gain experience and advance to higher Ranks. However, this does not mean that their combat capabilities cannot be increased. This is mainly done by installing Upgrades in the Armory (Androids do not feature abilities or biography, but they have Upgrades). Android upgrades are not available from the very beginning - you must complete Modular Androids project first. Android Upgrades are divided into four groups:

Unfortunately there can only be one upgrade in each slot. Curiously, Android Upgrades cannot be uninstalled, only replaced. But, if your Android gets destroyed, the upgrades it had installed are not lost - you'll be able to install them in the next Android model you buy. Also note that the Android upgrade items (or Android Mods) are never available as Mission rewards or in the Scavenger Market - you have to buy them from Supply.