The Battlescape is the tactical portion of the game, where all ground combat in Enemy Unknown and Terror From The Deep take place. X-COM Apocalypse also features a Battlescape, though this article will only detail the Battlescape in the former two games as they are nearly identical.

The terrain on the Battlescape will vary depending on the geographical location where an enemy ship has landed or crash-landed, or even by the type of mission.

The battle takes place on a layered tile map. Maps will have dimensions that range between 40 and 60 tiles in width and height and have either 2 or 4 map layers. Exterior maps always have 4 elevations and can have areas of 40 to 50 square tiles in Enemy Unknown or up to 60 in Terror From the Deep.

In Enemy Unknown/UFO Defense, interior maps always have 2 elevations and are always played in 60 square tile areas. TFTD differs in that all maps use 4 elevations except the maps in the final level, which only use 2 per map.

The map shows all walls, obstructions, ceilings, floors that can are currently in view or have previously been seen seen. The general look of the battlescape is determined by the mission, the aircraft that have landed at the site and the area where the mission was initiated.

With the exception of doors that close automatically, most map elements are static by nature. They do not change until they are damaged by weapons fire.

In addition to physical items shown on the map, it will also show differences in lighting which can affect visibility when on Night Missions. The parts of the map not visible to your troops will be left black, covered by the shroud of war.

The lighting in a particular spot or tile consists of an ambient light level to represent the time of the day and any fixed light sources in the vicinity. It is also affected by the light thrown off by moving light sources, which are made up of player controlled units, flares and fires.

The shroud of war, or fog of war, is common in many strategy games to represent areas that have not been seen or visited. In effect, areas of the map are coated in black until a friendly unit looks at it. From then on, the fog is lifted for the rest of mission, although it should be noted that enemy and neutral units moving into a previously seen area will not be seen unless observed by a player controlled unit. You only retain knowledge of the terrain itself.

It must be noted that physics and gravity in the battlescape do not apply to any map features, except the units and objects that can be picked up. This means that the entire lower floor of a building or craft can be destroyed and leave the upper floors freely floating in the air.

On a map, soldiers, aliens and sometimes civilians interact with each other and the environment. Generally by way of projectiles and explosives.

Soldiers: The principal playing piece of the player, representing an X-COM Soldier (Enemy Unknown) or Aquanaut (Terror From the Deep). Comes in two genders and four different races. His starting inventory can be selected by the player, before the battle, after the arrival of the troop transport. He can equip and utilise any item on the battlefield, including those that are dropped or thrown by the aliens. In addition, he can be equipped with different sorts of body armour at the base, before the mission, which may grant him the hover ability. However, he is susceptible to physical damage, stun damage and fatal injuries that are mainly inflicted by the aliens. Also he may lose morale from squad casualties or panic attacks from the aliens. In worse cases, he can even be mind controlled, at which point the alien gains temporary control. Survival will ensure that that the soldier will experience statistic grow, providing that he took some active part in the battle.

Aliens: The alien's playing piece comes in a variety of different races, all with varying statistics and inherent resistances to various types of weapons. Some even have special built-in abilities. Has never been observed picking up items from the floor, nor throwing any other item besides a primed alien grenade. Otherwise, has very similar properties to the player's playing piece.

A list of droppable items, and of course a description on explosives in general

All discussion on how damage is dealt and received by units. Covers damage, armour, explosions.

Psionics are initially a dangerous facet of facing some of the alien races that can make things very difficult for your squad, especially for those soldiers that turn out to have low Psionic Strength, as they will be targeted constantly by these psionic-capable aliens. One you have captured a psionic alien and researched it, you will be able to develop psionic soldiers by training them in Psionic Laboratories and equipping them with Psi-Amps.

Psionics allow the wielder to attempt to either panic or Mind Control enemy forces, with the success rate being dependent on relative psionic strength and skill between the attacker and defender, and the range between them. Panicked soldiers can be a problem as they can leave gaps in your lines, but Mind Controlled soldiers are far more serious a problem, as they will turn around and fire on their comrades. A psionic attack's effects will last for one full turn per attempt, including both the user's and the following opponent's part of the turn, although the morale lost to a successful attack will often mean the soldier will be out of action for longer as they continue to panic or berserk for a time, even if no further attacks are directed towards them.

The bulk of the battlescape scenario will take place here. Here, the player can view the areas of the playing board visible to their pieces and can choose actions for them via the Battlescape Control Bar. 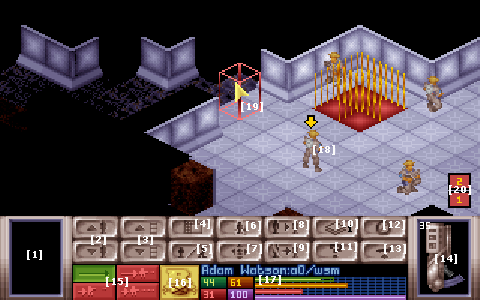 The main features of the Battlescape Screen are labeled. Refer to them below for an explanation.

Terror From the Deep features an identical control panel to Enemy Unknown but introduces two new buttons: 'Reserve for Kneeling' and 'TU Bleed' (used to zero the selected unit's time units to ensure the unit cannot use reaction fire).

This is accessed by pressing the "Inventory" button on the main battlescape screen and is also shown at the very beginning of a tactical mission. This screen shows the equipment available "on the ground" (or, for the pre-mission phase, in the cargo-bay). 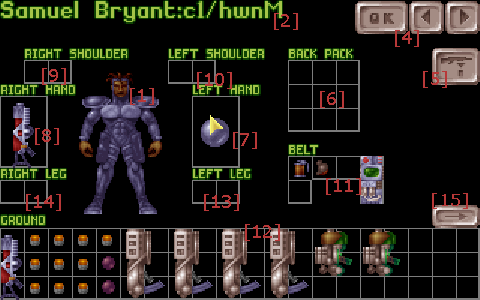 The main features are labeled. Explanations are as follows:

How to end a mission

Missions will end if one of the following happens:

There are several cases where aborting a mission may be a good option:

Though the game reports that aborting a mission as a failure, this is not necessarily always the case as long as the results that you set out to achieve are completed.