The Bravery stat is a measure of how brave a unit is in the face of danger. A higher bravery score reduces the amount of Morale lost due to morale-decreasing events, so a brave unit (alien or X-COM) has less likelihood of panicking or going berserk during combat.

New X-COM recruits will always begin with a value between 10 and 60. Due to the way the Bravery stat is stored in the data files, it will always be an exact multiple of 10. X-COM soldiers' Bravery is capped at 100, although tanks and certain alien races can have a Bravery of 110. Unlike other stats, Bravery cannot overflow its cap because it can only increase by one unit (10 points) at most per combat mission.

The average number of turns needed to panic/berserk is simply the reciprocal of the chance of going panic/berserk: 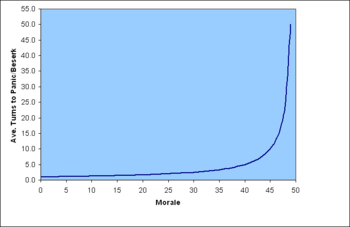 Graph of Morale vs the number of turns to panic/go berserk.

The chance of getting an experience point (EP) is much higher, just below Morale 50. But even if your soldier's Morale is well below 50, their Morale increases by 15 each time they panic/berserk, so it will cycle closer to 50 over time... IF they don't keep getting Psi-panicked continuously (see Training, below). This means that, on average, it takes 14.93 turns to go from Morale 0 to 60 (the four asterisked points above, added together). Because four of those turns are spent in Panic/Berserk itself, there are 10.93 turns for which you'll get a Bravery experience point. But that's just the average... your soldier might Panic four times in a row (equals no experience) or may take many dozens of turns sitting at Morale 45.

Your soldiers' Bravery can be trained easily and safely once you have completely secured a mission field, particularly after your troops have received Psionics training. Capture (i.e., Mind Control) one or more psi-enabled aliens (Ethereals or Sectoid Leaders/Commanders) and box them into a corner (or the Avenger) so you can shoot them later. Fully disarm the aliens using the inventory trick, and have all your soldiers drop all their weapons and grenades as well so they don't kill each other.

ANOTHER METHOD, which does not rely on psi-capable aliens, is to MC several aliens... then get an X-com soldier to shoot them to death while still under X-com control.

Note: Of course, if you are so psi-forces are so powerful that they can actually set up this scenario... you don't NEED to perform any more bravery training, since you would almost never lose morale in the first place. Unlike all the other stats, bravery's usefulness is inversely proportional to how powerful your troops are compared to the enemy. In addition, the bravery experience sytem has an important difference from other stats... it's like the Opposite of reaction gains, in that sense. For Reactions, your troops with low reactions will tend to never make reaction shots, and thus will never improve, whereas your ninjas will improve fairly quickly. For bravery, it is the only stat where a low starting score makes it more likely to improve.

In fact, Bravery tends to be a self correcting weakness. Either your soldier will naturally improve, or he will die, thus ending his plague upon your squad. In that sense, the best form of bravery training is just to fight normally, and let bravery rise by itself.

I, Jasonred 18:13, 31 March 2009 (EDT), have found a disgustingly easy technique, which can be used to train your entire squad's (-1 volunteer) bravery at once. Kill all aliens except for 1 Chryssalid. Now, feed one of your soldiers to the Chryssalid, while having everyone else in a safe spot, facing away from the alien/s. Next turn, 1 unit turns around, spots the aliens, mind control the zombie, kill zombie, turn around again. End turn. Turn around, spot aliens, mind control the zombie, kill it, turn around again. Repeat add infinitum. Alternatively, use an Alien Base. Mind Control and kidnap a Chryssalid using the Grav Lift Shield exploit. Then put the Chyrssalid in a corner, trap him with 3 soldiers. Who he will then zombify, but the zombies will block his path to your other soldiers. Repeat above steps. You can't fly out of his reach in this confined space, but you save the effort of having to neutralise all the other alien forces. Result: Eventually, entire squad turns into chickens. Disadvantage: Eventually, the entire squad turns into chickens. Also, you will end up with a REALLY bad score for that mission, since it will count as having many many soldiers dying over and over. And over and over and over and over. Advantages: You can bring in 26 soldiers and train bravery for 24-25 soldiers in a very short space of time. No fear of mind control. Very easy to set-up and retreat from battle, and fast too, since you don't have to neutralize Psi capable aliens and specifically leave 1 of them alive. Note: This method is exploiting SO MANY bugs and glitches and AI failures, you might as well just use an editor, from "honor" point of view, lol. Admittedly, there is a very perverse sense of satisfaction in doing it this way...

Try bringing one high ranker, and little or no other officers, for this technique. Normally your highest officer mitigates morale loss (but causes a steep drop if s/he dies) - so reversing this (zombifying your Commander) will mean the least number of "rounds" and score loss. Don't worry, you'll get your Commander back... probably!

Psionic panicking attacks will reduce a target's morale by (110-Bravery) each time. Although high Bravery will not make a unit more psi-resistant, particularly to mind control, it can greatly reduce the impact of panicking attacks performed on that unit. See Morale#Psionic Panicking Attacks for full details.