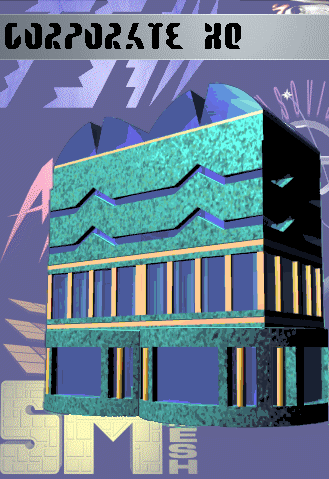 Large. Expensive. Modern. Three styles of executive buildings with open areas of sparse wooded grasslands.
One style of battlescape is a single large building with massive entrance staircase and large lobby which commonly is the area of battle due to the grav lift able to move a large force without restriction. The upper levels will often hide the remaining hostile units if they are not hiding amongst the trees.
A second style of battlescape a wide, long thoroughfare lined with numerous multi-level small office bloocks. Hostiles usually are loitering on the main route with some in the upper office levels. Any isolated enemy may be found in the tunnels between the offices.
The last style contains office blocks with banked grassy slopes. The scattered placement of the offices governs a more methodical approach when sweeping the battlescape since tunnels and corridors allow easy flanking movements or ambushes.
The coffee doesn't taste right.