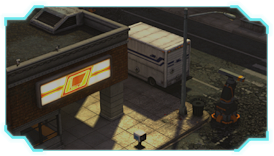 The Covert Operations division and the tricks EXALT get up to are similar in Long War as in vanilla.

EXALT begins operations against XCOM in May. EXALT spawns two cells after 18-24 days have passed (15-24 on Brutal/Impossible) and then immediately triggers a Sabotage operation. Thereafter, one additional cell can spawn after 7-10 (Classic: 7-11, Brutal: 6-10, Impossible: 6-9) days have past (this cooldown scales with the dynamic war option), up to a maximum of 10 cells at once.

Newly spawned cells select countries semi-randomly according to a weighted list. Each country has 0 weight by default, and countries add or subtract weighting based on a variety of factors.

Once all weights have been computed, the location of the EXALT cell is randomly determined, with the chance of selecting any given country equal to <weight of country> / <sum of all weights>. Any countries with existing exalt cells, as well as any countries with 0 or less weighting, are removed from this calculation.

Once the location is randomly selected, there is a final random roll to determine whether most cells succeed or fail to spawn, depending on whether or not the player has satellite coverage over the country.

Cells ignore this roll and are guaranteed to spawn in two circumstances: during the initial spawning of 2 cells in May when EXALT triggers as well as during cell relocation.

Cells may relocate to a different country in some instances. The relocation uses the same algorithm to select the destination as a regularly spawning cell, except the cell does not have a chance to fail to spawn.

When an EXALT cell relocates, it effectively counts as if a new cell had spawned; this triggers the cooldown between consecutive cell spawns, and resets the cells attack cooldown.

By default, active EXALT cells have a 50% chance to cause any country within the same continent it is located within to gain an additional +15 panic from any panic-increasing event.

Furthermore, each individual cell, if hidden, will conduct an attack on XCOM after a cooldown period has elapsed. This cooldown period is 7-21 days (7-15 on Brutal/Impossible), which is randomly determined in advance when it spawns, relocates, or after each attack. This cooldown is tracked separately per cell. However, at least 5/5/4/3 days must pass between consecutive EXALT attacks, in the case that there are multiple EXALT cells hidden; an attack will be paused until at least that amount of time has passed if they would otherwise be conducted at that time, triggering immediately as soon as the minimum cooldown period expires.

Each attack in which the minimum condition is met is equally likely to occur (though the first attack conducted is always a Sabotage). Once an attack triggers, the cell is exposed for 2-5 days (4-7 on normal), during which time its activities are paused and XCOM can deploy a covert operative against it.

If no conditions are met for any attack to occur, the cell is simply relocated to a new country.

XCOM can prevent EXALT from conducting operations, and eventually defeat EXALT for good, by deploying Covert Operatives to EXALT cells.

A covert operative can be deployed to target any exposed EXALT cell. Once a Covert Operative is deployed in the field, all EXALT cells cease all operations and activity. No new cells can spawn, no new operations can be conducted, no EXALT cells can hide, EXALT cells won't magnify panic increases, and all timers and cooldowns go on pause.

EXALT cells are automatically exposed when they attack XCOM. But rather than wait for EXALT to attack XCOM and incur losses before XCOM counterattacks, XCOM can expose EXALT by performing Intel scans in the Operations room instead.

If there are any active EXALT cells present when an Intel scan is triggered, they will be exposed for 2-5 days (4-7 on normal), rolled randomly. All of activities of the affected cells pause while they are exposed, but resume immediately after the elapsed period; a cell that was just about to attack may immediately strike after it hides again!

Once a covert operative has been deployed to the field for 6 days, a Covert Operation mission is triggered. XCOM will need to extract its Covert Operative or they will die. Furthermore, completing the mission objectives allows the recovery of § and Intel.

The first two exalt missions will always be a Covert Data Recovery and a Covert Extraction; the first is picked randomly, while the second is always whichever one wasn't done first. Thereafter, there is exactly a 50% chance of either mission type spawning.

If completed successfully, a covert operation destroys the cell, awards XCOM § and Intel, and reduces panic in the country by 20. Furthermore, all remaining EXALT cells worldwide are relocated, resetting their attack cooldown and triggering the EXALT spawn cooldown. Conversely, if a covert operation fails, the targeted cell merely relocates and any remaining EXALT cells worldwide resume operations immediately, without resetting their cooldowns.

The number and strength enemies in a covert operation depends on the total number of covert operations attempted over the course of the campaign as well as whether or not the operation is a Data Recovery or Extraction mission. See those pages for more details.

To stop EXALT for good, XCOM will need to locate and take out the EXALT HQ. At any point, XCOM can accuse any country of harboring the EXALT HQ; if you guess incorrectly, the country immediately leaves XCOM (conversely, if it has already left, every country within that continent gains +40 panic), and alien research increases by 50. As a result, it is not recommended for XCOM to make wild accusations against countries without more information.

Covert Operatives are crucial to narrow the search down. As XCOM conducts successful covert operations against EXALT, covert operatives will return with Intel on the location of EXALT headquarters. Each piece of Intel conducted removes 1 potential candidate for the location of EXALT HQ, a departure from vanilla which allowed multiple countries to be ruled out by a single Intel piece.

Success awards XCOM with large amounts of resources and several pieces of unique loot, and ceases all subsequent EXALT activity. Failure causes the same effects a failed accusation would have, forcing the country to leave the project or causing +40 panic continent-wide.

Cells can attack as soon as 7 days after spawning, and one spawn every 6-10 days. An unlikely but plausible scenario is that a hidden cell spawns immediately after XCOM scans; thus, it's hypothetically possible for a cell to attack XCOM 7 days following a failed scan. Similarly, following a successful covert operation, it's possible an EXALT cell spawns almost immediately afterwards and strikes or, if a second cell is already active, it's possible for it to attack as soon as 7 days afterwards. Therefore, if XCOM wants to avoid all EXALT attacks, it should scan 7 days following a failed scan or successful covert operation.

Two possibilities may also occur after an unsuccessful covert operation: either 1) the cell is alone when it relocates, striking as soon as 7 days later, or 2) there are multiple cells, and any cell other than the targeted cell can strike at any time. As a result, XCOM should scan immediately following a failed covert operation if there are multiple cells active, or seven days later if there is only one.

Covert operations are among the most difficult of missions, particularly in the mid and lategame. If you fail a covert operation here or there, it's not the end of the world. So long as your covert operative and soldiers extract alive, you can try again next time; the only thing you lose is some cash rewards and Intel, plus the cost of additional scans. For more information on successfully completing each mission type at the tactical layer, see the EXALT Missions page.