This is an editor that the developers used to create the Mega-Primus cityscape maps. It works well for basic functions (readme.txt) and can be used to edit or create a new cityscape.
Use this editor, Apatcher to easily enable/disable the Cityscape Designer without using a hex editor.
or
Use a hex editor and edit UFO2P.EXE in the UFOEXE folder as on image (make backup), then create an empty txt file in the UFODATA folder and name it citydemo (not citydemo.txt - you must remove the extension) or use this: ✦ File:CITydemo.zip

Notes: Diplomacy interface that was presented by Skin36 to OpenApoc community

Notes: Building Auction that was presented by Skin36 to OpenApoc community

All organisations could recruit individuals with a set of skills that allowed them to operate under cover more effectively. Spies could actively assume the identity of other units as specified by the player and be sent to the buildings of other organisations to obtain information, infiltrate and influence the command structure, steal, assassinate (via battlescape "stealth" missions). The success of a spy, in all instances, was dictated by their unit stats and the player would have to be very careful in recruiting and training spies for the exact purpose X-COM intended them to be used. Spies being found or otherwise discovered in a rival organisation would severely affect relations with X-COM. Spies could also be used and exchanged in diplomacy between organisations, though this was never implemented beyond a playable "table dialogue" as far as im aware. 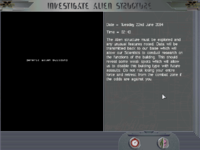 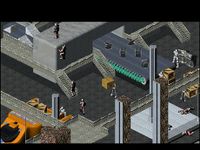 The dimension gates were not always present; the aliens could choose (often in response to X-COM aggression in their dimensions) to close the gates. This could leave X-COM craft stuck in the alien worlds, or in Mega Primus...

Craft would "land" next to Alien buildings to go on missions... There was no umbilical and the aliens could "grow" multiple copies of each building...

In early versions of Apocalypse the Alien Life Cycle was strictly enforced. UFOs dropped Eggs, Chrysallis and Brainsuckers into Mega-Primus and rarely other life forms (unless it was late game and organisations had come under alien control or the aliens had moved over to destruction and bombing missions). This allowed them to evolve undetected (unless X-COM searched) for many days as they spread throughout the city... It also forced X-COM agents to regularly check buildings to control the spread of Micronoid infestation.

Here, X-COM is near the end of a mission in which they have faced more than 30 brainsuckers and no other mobile lifeforms! 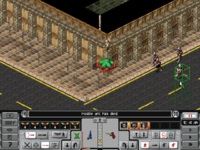 When the aliens stopped following the strict alien life cycle to begin terrorising and not just infiltrating the city, they could drop larger units such as Psymorphs and Megaspawn into the game

Later in the BETA game you also got access to a "Structure Probe" bit of craft equipment that could be fitted to the Dimension Probe and allowed you to scan buildings without risking agents. The information returned however was less accurate.

AI behavior in Beta and Vanilla

Agents on Normal or Safe behaviour settings on Vanilla and BETA will:

Unique to BETA (Does all of the above plus these behaviours too):