Engineering is the discipline of 'making stuff'.

The workshop is available as a Small facility in the beginning, and when the relevent research is completed, a Large facility will be an option. Placing small or large workshops would be ideally spread across all bases to limit the possibilty of losing all manufacturing capability if built only in one base.

Technical personel may be hired with an education level of average to gifted. The better the skill of a engineer, the faster the construction project will be completed.

The total quantity of Engineers across all bases at any one time is fifty. If it is reduced for any reason, more Engineers will become available to be hired. 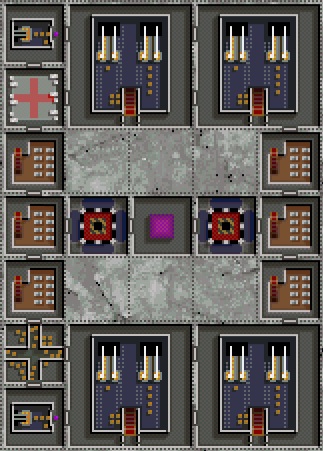 A compact workshop base layout ...which will wipe out all manufacturing capability if it were to be lost.

These is nothing to built at the start!
X-Com will need to build more facilities in the future to enable the manufacture of advanced weapons, crafts and devices, armors, etc. Constructing an item will allow a profit to be made when sold on the market.

The timing to finish any project is always completed on the hour.

eg: a project started at 0:59 and needing one hour to build three items, will complete the project in one minute! ...because always completed on the hour. (see Build Time‡ below)

If needing to start a new project as soon as possible and there is a large project already in progress, it is best to not outright cancel it, but to move the slider to have no more remaining items in the build queue and then allow this product to finish. If cancelled, the progress made with this last item will be lost, including any costs.

or, Costs Of Upkeep
Engineers receive a salary and maintenance of facilities (living and workshop) which will reduce your profits by a certain amount each and every week. Once a project's profit is calculated without interuption (preferably over a whole week), it is then matched with the size of the facility being used. Profit totals will become more accurate:

Living quarters is half filled, so maintenance can be halved as well.

Every item is profitable to manufacture, but your sell price (and eventual profit) is determined by market forces. If you are selling so much (ie: flooding) that you drive the price down in the proceeding weeks, you will have to re-evaluate each manufacturing run using this new sell price of the new week, to find the best profits.

Items have differing amounts in the Market Capacity column which is a rough indicator of how many you can sell before you influence the Sell Price towards its lowest value.
eg: selling x25 Dimension Missiles may slightly reduce the new-week sell price, but selling x25 Disruptor Guns will be classed as 'flooding' and will drive the sell price down, faster with a 'flood' every consecutive new week.

¹ Based on listed Facility ie: Small will use 500, Large will use 1000 in the final calculations
² Not regarding time, salary, maintenance.
³ Rounding is only used for display only, all other calculations use the real number.
↓ Shortened to four decimal places.
† Quantity listed as decimal number = optimisation needed if not doing multi-week projects.

Every single skill point closer to the perfect 1000 total skill will decrease the time taken.

Profits and all the calculations...