Most exterior diagonal and some flat UFO walls which occupy the entire tile have faulty boundary definition. A grenade thrown from outside the UFO onto one of these faulty squares will detonate inside the UFO. An unconscious unit thrown onto the same type of square from the outside will wake up inside the UFO once the stun damage has worn off.

If an agent is wearing armour which enables vertical movement (see Flying Suit/Mag-Ion Armour) and they are standing under a diagonal overhang, moving up one level will cause the agent to be 'inside' the wall. This agent can now move either way 'through' the wall.

If an agent does not have flying capability, they can still move through walls if they are on a different level to the wall which you are planning on moving them through.

eg: if you're on a level above and next to a UFO wall (eg: like a barn roof). Move your cursor to a point that is directly above the UFO wall you want to 'stand' in (and eventually go through) and click the mouse button to make your agent move. The agent will walk off the edge, drop down a level (or more), and then step right into the wall. Once your agent is standing inside the UFO wall tile, you can now access the inside of the UFO without using the doors, or you could just throw a primed grenade inside and then step out of the wall to the outside. The best effect of this exploit is sneaking up behind the aliens within their UFO when they are watching the doors.

Here's a visual demonstration of this in action with the Lightning. Note that this example is one you want to avoid - but still demonstrates this feature in action. 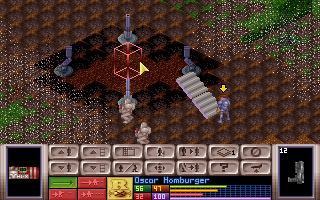 The principles involved are still the same. You instruct the agent to move on the same level. The game obviously doesn't note the stairs in the way (or if there's a hole in the agent's walk path. 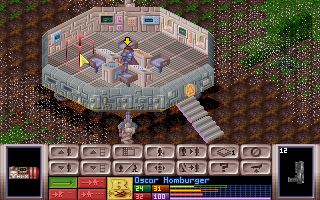 The resulting destination forces the agent to be on a different level entirely. What's happened is that now the hapless soldier has walked into the Lightning's Power Unit. Since the seats on all four sides of the units are solid objects, the soldier is effectively stuck there for the rest of the mission!

Large units use four map cells. The primary quarter, the part that has all the vital statistics and the first part to mind control, is the topmost quadrant (when viewed in tactical view) or the north-west quadrant (when viewed in map view). When moving such units up or down to different map levels (ie: elevations), mainly via stairs or dropping it off the edge of a wall, the game only uses the primary quarter for collision detection.

WARNING There is a minor bug which is connected to this exploit. Read about it here: Faulty Large Units

Use this exploit to move the large units through narrow stairs and ramps by 'using' the primary quadrant. The other three sections will clip through the terrain.

See Through A Ceiling

Agents standing on raised terrain (such as craft ramps, haybales, stairs), do not have a larger sight radius, however, standing on such elevated features raises the agents field of view. This can cause the head of the agent 'pop through' a ceiling and view the floor above. Standing on haybales in the barn is will always enable this. Furthermore, aliens love to ambush the top of the stairs in such barns, so using the stairs is often dangerous. On top of that, despite the fact that GRAPHICALLY only your agent's head is poking through, the game treats it as if his gun is also sticking through the floor... you can cleanly shoot at any offending aliens without the floor blocking your fire at all.

Throw Through A Ceiling

All objects can be thrown up through a ceiling to land on the floor above. To throw something onto the floor above (even if it that floor has not been scouted yet), just place your cursor on the level above and near your agent and 'throw'. The item (typically a primed grenade) will now be up one level (or more) sitting on the ground. Also, since explosions are confined to one level, your agent is safe from any damage from any explosions. This exploit can be used with anything that has an explosion radius (eg stunbomb or blaster bomb)

More of the same. You can fire an Rocket/AC/HC with HE or IN into the ceiling. The explosion will occur in the floor above. Using Incendiaries in this way is a cheap and effective way of killing aliens in command centers without destroying loot.