The tactics listed on this section of the field manual can be seen as doctrine: they provide a tested response to a number of situations that can be encountered on missions, allowing for a quick reaction and to prevent confusion.

However, the complexity of combat situations often makes it impossible to apply doctrine to every mission. Therefore field tactics can be viewed as freedom of action for the leader to execute his mission in the way he sees fit, rather than being told how to do it. It requires that leaders learn "how" to think rather than "what" to think.

Each tactic shown below aims to demonstrate the mechanics of fighting the extraterrestrials in several situations. Execution of field tactics requires initiative, resourcefulness, and imagination. Squad leaders must be resourceful enough to adapt to situations as they are, not as they were expected to be. Combat situations might require a mixture of those tactics and concepts: it's up to the leader to decide whose to use and when.

Since the nature of X-COM missions involves deploying to a limited area where the presence of hostiles is certain, squads, fireteams and individual soldiers must learn specific movement techniques. Although there are other types of movement in infantry combat operations, these fall out of the scope of this field manual due to their limited use when fighting extraterrestrials.

Bounding overwatch is used when contact is expected, when the squad leader feels the enemy is near or when a large open danger area must be crossed.

a) The squad leader watches the terrain and determines the direction to where the squad will move. An overwatch fire team is set to cover the movement of the other fire team.

b) The trailing fire team bounds to the location and sets itself in a position to overwatch the other team's movement.

c) Both teams then repeat the movement until they establish contact with the enemy.

d) The teams can bound successively or alternately as demonstrated on the figure below.

e) Heavy Weapons Platforms, if available, can be used instead of a fire team during movement. 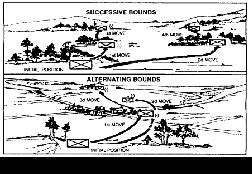 The firing and moving take place at the same time. There is a fire element and a movement element. These elements may be single soldiers, fire teams, or squads. Regardless of the size of the elements, the action is still fire and movement.

Movement is of course influenced by terrain - see next chapter.