The Grenade Relay is a manoeuvre that allows you to quickly move a live grenade from one part of the map to another by having a chain of soldiers pass it from one to another until it reaches its destination.

This technique helps front-line scouts by reducing the amount of Time Units (TUs) they need to spend to deploy an armed grenade. By leaving them with more TUs, they can better defend themselves against enemy reaction fire or use it to take other actions.

The grenade relay can be thought of in the same manner as a baton relay race where runners pass a baton to another until the last runner crosses the finish line with it. Another analogy is to imagine a linear game of pass-the-parcel.

A grenade relay is performed by having a soldier at the rear of a formation arm and pass a grenade forwards to the receiving soldier. If the intended recipient is out of throwing range, then to the nearest soldier who will then pick it up and pass it forward. This action is repeated as often as necessary until it reaches its destination.

Soldiers in the middle of the relay can re-position themselves as needed to work around obstructions.

The grenade can be armed during any point in the relay. Ideally before the last soldier in the chain.

The normal steps needed to arm and throw a grenade will cost 75% of total TUs. Extra costs also apply if you need to move the grenade into a hand. With the relay, a scout will only need to spend 8TUs to pick up the grenade and then 25% for throwing it.

With more Time Units left, the scout's ability to resist attracting reaction fire is improved. The time units can also be used for other actions that will improve the scout's odds of survival.

The alternative to the relay is to have grenades pre-armed. This provides faster deployment, but makes the person carrying the grenade a walking bomb that will go off when they are killed or incapacitated. The relay provides similar benefits except that grenades will only be armed as they are required.

The main purpose of this strategy is to reduce the scout's TU consumption to keep their reactions high. It does result in a larger overall amount TUs spent over a greater number of troops.

Though this does expend a larger number of time units over a number of soldiers, the soldiers priming the grenades will be situated in much safer position further from the enemy. They are less at risk from return fire than the soldiers closer to the enemy.

As with any tactic involving explosives, general carelessness while handling live explosives can prove to be quite disastrous.

Extra time should be reserved for moving to a mis-throw, or escaping from it. Soldiers mid-chain often have plenty of TUs to spare to react to mis-throws, but be careful that you do not pass the grenade to someone with no TUs.

Pay attention when performing this manoeuvre and ensure you complete it. Getting distracted and forgetting to complete the relay will have an undesirably negative effect at the end of the turn.

Take care not to throw a live grenade to a soldier standing on a pile of other grenades. As there is no immediate indicator of the state of the grenade until after it is picked up, there is nothing more frightening than to have to hunt through a pile of identical grenades for the live grenades while your TUs rapidly dwindle.

When relaying primed Proximity Grenades - even more care should be taken then normal. The accuracy of the throws have to be perfect as mis-throws can only be recovered by vertical insertion with Flying Suits. If you must relay a Proximity Grenade, there is less risk involved if it is armed closer to the end of the chain rather than at the start of the chain. 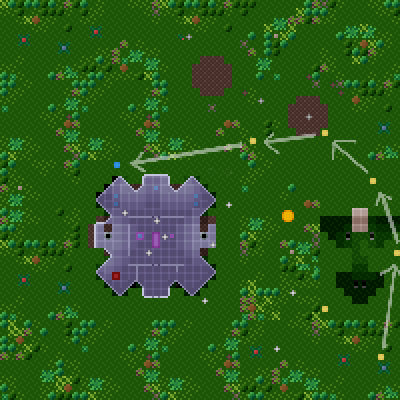 In this example, it's the start of the turn and the scout in the upper middle portion of the map has moved and spotted an alien by the Abductor. The scout's not very accurate, but can easily deal with the alien by throwing a grenade. However the scout has already spent too many time units and only has enough to prime a grenade or throw it, but not perform both actions.

The only other person in the field with a grenade happens to be the soldier in the South Eastern corner of the map. This soldier has a High Explosive but is not especially strong, so cannot throw it to the scout from here. To add to the soldier's troubles, the Skyranger is in the way. There is a chain of soldiers within throwing distance of each other nearby.

The solution to this problem is to have the soldier with the High Explosive arm it and throws it along to the nearest solider. That soldier then picks it up and throws it to the next. This is repeated until it reaches the scout, who finally throws it at the alien.

This example is deliberately prolonged, but can be shortened depending on how strong the soldiers are and the weight of the grenade used.

This tactic is not limited to grenades and can be adapted to quickly transport other objects to other soldiers around the field, such as weapons, ammunition, Medi-Kits, Electro-flares and even unconscious bodies. This way these devices can be provided where they are needed the most quickly and without having to physically walk them over.

With careful management of time units, the relay can even be adapted to allow several soldiers to operate the same device in the same turn.