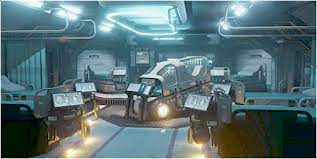 The infirmary is a new building introduced in the War of the Chosen expansion and replaces a part of the Advance warfare center, now being the building that grants increased wound recovery of the barracks. This building is also used to help recover from a new mechanic introduced in War of the Chosen called "negative traits" which can occur from a soldier taking a major wound during combat. Lastly, this can be upgraded to allow for sending a soldier on a mission despite their condition for emergencies.

This building is now used to help improve wound time recovery. This bonus requires staffing a scientist and improves healing by about 50%.

This building can help a soldier recover and remove a negative trait by leaving them in the infirmary for some time. It can also be recovered by sending the soldier out on several missions without taking injuries.

This upgrade allows for sending out a soldier regardless of their current state but is then returned to that state upon mission completion. This can be done upon the squad selection screen when preparing for a mission, doing this will each cost an elerium core. Each soldier can only be revitalized once per campaign and only one soldier can be out revitalized at a given time.