A key part of the success or failure of any mission is the Initial Deployment phase, particularly due to X-COM pilots tendency to land right next to enemy UFOs. Rookie soldiers are probably happy to have such a short walk, at least until they get shot in the head the first step they take down the exit ramp.

The deployment phase will significantly vary depending on your resources (equipment and soldier experience), the tactical situation (especially the terrain and the location of the craft in relation to the Battlescape edges), and the Transporter that you are using to get to the site of the engagement. The following examples should be read as training material rather than an absolute rules to follow in most cases.

Rookies are often anxious to see (and take a shot at) aliens. This can result in them piling out of the Skyranger as soon as it touches down and charging right into an ambush. A more methodical exit from the Skyranger will maximize alien causalities while increasing the life expectancy of agents.

The general rule of safer deployment is to not move units out of the transport on the first turn, when enemies have full TU available for reaction shooting. It's safer to move out on the second turn after enemies have moved and spent some of their TUs. The first turn can be used to deploy a smoke screen outside (and inside) the transport, and surveying the landscape through the craft's portholes (craft's walls do not block terrain revealing).

Once they have spread out a bit, more agents will disembark. Staying spread out is vital. Alien grenades can be brutal without armor.

When a scout makes contact with an enemy, the scout retreats out of the line of fire and the back line troopers with HE weapons take some shots. In this case there were two troopers with a line of fire on the alien and one of them killed it.

Once contact was made with the enemy the scouts all froze for a turn, kneeling. Sure enough the first Sectoid had a buddy who came out the door on the next turn. The scouts got it with reaction fire. This battle ended then since the other Sectoids didn't survive the crash.

Don't try to deploy all your agents! Leave some reserves on the transport. The diagram actually shows a pretty aggressive deployment. The number of agents deployed should be able to handle most situations. Only bring agents off the sky ranger as replacements or to fill in gaps if the deployed forces get stretched too thin. 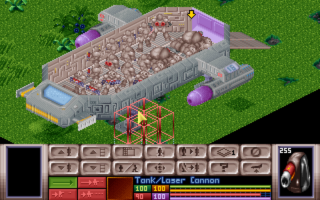 Deploying with tanks is fairly similar to deploying without them. You can often skip the smoke grenade. Since tanks can't advance in skills, they are cheap to replace in relative terms (especially non-hover tanks). Most aliens (save Mutons and Ethereals) will prefer to attack tanks over agents. So you can use them to draw fire away from agents. There are two goals when deploying tanks in the first turns. First, locate and prioritize targets close to the transport. Second, set up a screen around the transport exit to protect agents. In most cases you won't want to use the tank to attack enemies directly in order to allow agents a chance to advance. However, don't hesitate to kill aliens with the tank if there isn't a safe way to get an agent into position. Keep the tanks TU's in mind. It's best to keep about 50 in reserve to lessen enemy reaction fire. If the landing zone is very hot, withdraw the tank back to the transport and toss smokers. Note: Chryssalids seem loathe to walk up the ramp of the landing craft, so if one is visible from the back door, you can fire away at them with no retribution.