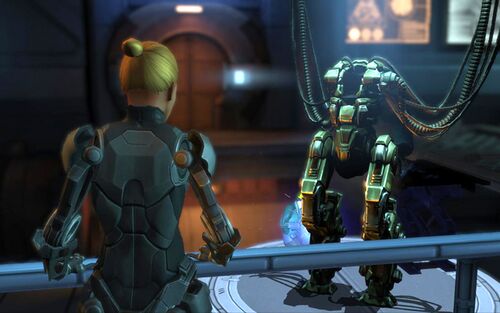 The (M)echanized (E)xoskeletal (C)ybersuit troopers remain fundamentally the same as in Long War. Although Long War introduced new MEC classes as well as soldier classes, Long War Rebalanced has cut down the former 8 MEC classes into 4, more generalized classes. This also increases flexibility in choosing which soldiers to augment, as each MEC class can be created from 2 different soldier classes.

As with vanilla, MEC Suits cannot take cover beyond breaking line of sight. Fortunately, they possess a limited amount of innate defense and have innate damage resistance, making them more difficult to take down. Some MEC classes can increase this damage reduction even further with perks.

MEC troopers cannot function without a MEC suit, meaning that any surplus MEC troopers will be useless unless given a MEC suit of their own, but also suffer from Fatigue and need to rest after each mission, more so than normal troopers. The suits can be cycled between operators and rearmed as long as you have enough operators for them. Barring injury or fatigue, it is possible to have a MEC on every mission. Like gear from your other soldiers, MEC gear can break if your MEC takes health damage, and there is a chance to recover the suit and equipment if the MEC trooper dies in combat.

Even though they are heavily mechanized, MEC troopers are still human beings and are affected by panic and psionic powers like Mind Fray.

For semantics, MECs are considered soldiers, as opposed to SHIVs which are not. Thus, abilities that cause an affect on soldiers will still affect MECs. However, MECs are not considered biosoldiers. MECs, SHIVs, and biosoldiers all fall under the broad category XCOM units or just units.

Like vanilla, MEC troopers are chosen from the soldier roster on the base. Only soldiers with a rank of Lance Corporal or above, that are not Officers, are eligible for MEC training.

Augmented soldiers will have their mission count reset to 0, which reduces their fatigue accumulation after missions.

Augmented soldiers lose all XP and revert to SPEC rank upon being augmented. They also will lose all genetic modifications and psionic abilities.

Their attributes reset to:

The bonuses are variable and range from approximately 50% to 150% of the average. The actual formulas for calculating the bonuses is:

For each base HP above 3 (most starting country bonus attributes not considered) the soldier will gain a 20% chance of augmentation success.

For every 10 days of fatigue or injury (modified by campaign length) the soldier will lose a 1% chance of augmentation success.

Failure to convert a soldier into the MEC will occur immediately (if they fail), will consume the 50% of the augmentation cost, and the soldier will be wounded equivalent to the time they would have spent being augmented. 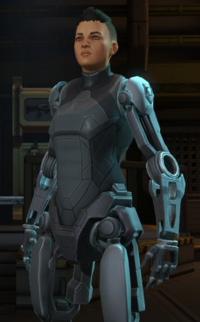 MEC Suits provides multiple options of exoskeletons per tier, splitting upgrades into Survivability and Mobility. The naming scheme for MEC Suits has been changed to make the different classes and tiers easier to distinguish. The MEC-1 Paladin can be upgraded to either the heavy HMEC-2 Defender for a focus on more Survivability, or the light LMEC-2 Valiant, for a focus on more Mobility. Both of these armors have two different options for the final tier, as well.

MECs have one primary weapon slot, two or three utility slots and one to three secondary weapon slots. The upgrades that go in these slots are researched and manufactured separately, and can be swapped out for each mission, giving them a high degree of tactical flexibility.

Primary Weapons include the same basic Minigun/etc. as the base game.

Utility upgrades include MEC-specific upgrade modules, along with a handful of items shared with SHIVs.

MECs are Offensive Support troopers, delivering high firepower to the battlefield, as well as supporting perks such as One For All.

Due to the MEC's variety of weaponry, ranging from the powerful Kinetic Strike Module to the less damaging but equally useful Grenade Launcher, the offensive capabilities of the MEC are great and offer a lot of tactical variety. However they are less useful as frontline fighters than one might think, due to their rather low ammo capacity and inability to take cover. This means that they, more often than not, become relegated to an Offensive Support role akin to the Rocketeer, though with more armor and a cooler sounding voice.

With a high base HP and somewhat high damage reduction, MECs can take quite the beating, however they are not invincible. During the late game, they are quickly killed by precise and hard hitting plasma fire from the Muton Elites, Mechtoids or the ever annoying Sectopods. Their maximum health can be boosted by items and Foundry projects, increasing their durability significantly. Classes such as the Goliath also compliment the MEC's "Tank" role, by giving a higher base defense and also several abilities centering around damage and/or panic reduction.

Some MEC class variants, such as the Shogun, allow for more tactical diversity, while others can give a different spin on a well-established class such as the Marauder compared to the Assault. Overall the MECs are designed to perform differently than the soldier classes they replace.

All MECs gain the perks:

One for All
Upon activation: gain 35% DR, immunity to critical hits, disable reactive fire, remove all base defense, and act as full cover element. Lasts until unit moves, overwatches, or uses an arm-based weapon. Does not trigger reaction fire.

Indomitable
If above half HP, fatal non-psionic non-melee damage reduces this unit to 1 HP instead.