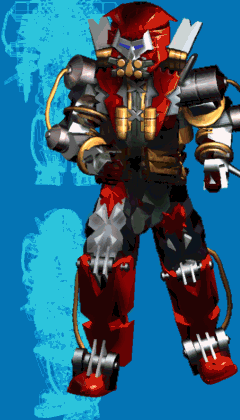 An advanced armor suit which is available after week one. (unless you have been raiding Marsec, in which case it can appear much sooner) It is lighter than Megapol Armor, but at the disadvantage of providing less protection. It does make up for the loss in protection by being slightly more resistant to explosions than Megapol Armor.

The armor (the body piece only) also contains anti-gravity equipment which enables the wearer to fly/hover in the tactical battlescape. No other item in-game grants this ability. If an agent is airborne then they receive an accuracy penalty. However, this disadvantage is more than negated by the ability to fly. It should be noted that flying does not only grant mobility... since the work is done by the chest unit, not the agent's legs, it doesn't use the agent's energy.

In battle the armor pieces are good against human tech but are clearly inadequate against alien weapons. The chest piece is especially vulnerable as it has 10 less armor than its Megapol equivalent, enough to take significant wounds from early bio weapons and the Disruptor Gun. Agents will find themselves weathering significantly less enemy fire than with Megapol Armor, so take advantage of flight to stay out of trouble.

The remaining pieces are useful for their low weight, which lets agents move much more quickly. Hybrids can especially benefit, as they have very low strength values and will be heavily burdened by Megapol Armor.

Despite being the manufacturer, Marsec does not equip its security guards with this armor.