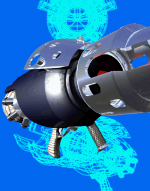 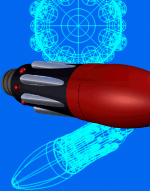 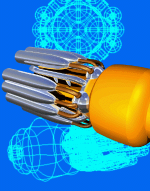 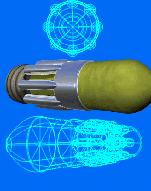 A large versatile missile launcher delivering three types heavy rockets with homing ability. Ammunition is large and heavy which limits an agent to five missiles each unless extras are carried by other agents. The launcher itself is very limited on the market but it is not an issue since it is used as a support weapon due to restrictive ammunition quantities. Homing ability tracks large targets well but the missile may not turn sharply to follow evasive units.
Explosive (HE) the strongest standard explosive ammuntion available to X-Com which is only surpassed in power by the High Explosive demolition charge, used to clear large areas of ground cover, severely damage hostiles from long distance and able to destroy building internals easily. High explosive missiles on the market may be limit the style of battlefield combat to more important targets.
Incendiary (IN) ammunition for engulfing large groups of hostiles in flames. Ammunition quantity is adaquete. Any unit hit with the rocket projectile will also suffer impact damage equal to the incendiary damage.
Note: All effects based on incendiary damage are identical.
Alien Gas (AG) ammunition for killing large groups of alien lifeforms. Missiles are manufactured by X-Com.


Note: Anti-alien gas heavy launcher missiles are only manufactured by X-Com. Marsec as the manufacturer is an error.