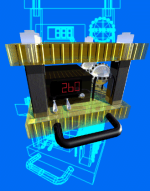 Explode-on-impact when thrown. RMB on grenade image in agent's hand.

A strong but heavy, demolition charge explosive grenade used to injure or kill stronger hostile forces, destroy building structures such as wall, ramps, fire escapes etc. and may form a crater in grassy terrain. An agent may not be strong enough to throw such a heavy device far enough to escape its blast radius, so using detonate-on-impact may not be suitable unless it is thrown from a high elevation, onto hostiles below. The timer will allow tactical placement, or dropped from flying agents, then evacuate the immediate area.

It is possible to bring down entire buildings through proper placement and timing of enough High Explosives. As a example see: [1]