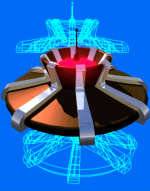 Explode-on-impact when thrown. RMB on mine image in agent's hand.

An explosive device which explodes when movement is detected. A basic proximity mine which can be set to detect movement in a pre-set radius and explode after a pre-set duration. It is used to deny passage through an area. Maximum detection radius is five cells on the same battlescape level. Flying units above or below the proximity mine wil not be detected.
The mines explosive damage may be enhanced by placing unarmed explosives nearby, but within the mine's detection radius. If outside the detection radius, the extra explosives may be stolen by hostiles without triggering the mine.