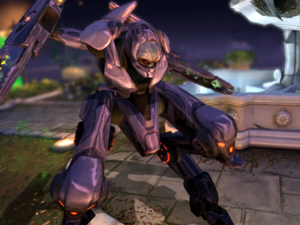 The Mechtoid is a MEC developed by the aliens for the Sectoids that appears on Enemy Within DLC. The Mechtoid has an ability called Plasma Barrage which allows it to fire twice in a turn if it doesn't move and Sectoids (including Commanders) can mind merge with it and give it a 6 damage reducing shield. The Mechtoid won't die if the merger is killed, but it will lose the shield and take damage.

Mechtoids can be fearful foes due to their resilience and firepower and will start appearing halfway through the game, with 1 or 2 Sectoids. After the Alien Base is assaulted you'll see them on the company of Sectoid Commanders, which turns them into a deadly combination of firepower and psionic powers.