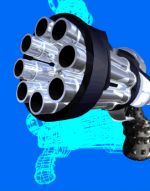 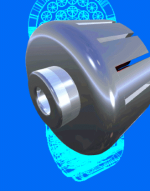 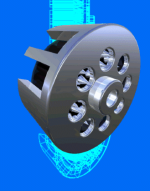 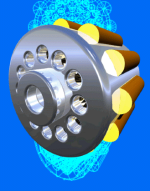 A heavy, powerful, versatile weapon usually the first choice when equipping troops for combat against the alien menace. The weapon's ability to fire three types of projectiles will keep this weapon in use on the front line until better exotic equipment is acquired. The fire rate is quite slow for a weapon with multiple barrels and is only slightly better than the Megapol Laser Sniper Gun. The market has limited ammunition stock levels, so a mix of other weapons may be necessary on the battlescape.
Armor Piercing (AP) ammunition is the most powerful round of any standard weaponry available on the market, even surpassing the Plasma Gun. A heavy hitter that can punch holes in stronger aliens only limited by its rate of fire. Dual wielding autocannons with AP ammo offsets the slow firing rate but should be limited to strong agents in close quarters combat to offset its now lower accuracy. If this type of ammuntion can be 'found' elsewhere, this weapon and ammo could be used up until it is devastatingly out classed.
Explosive (HE) ammunition is the weakest of any high explosive available to X-Com. It is used against weak aliens like Brainsuckers and Hyperworms when face-to-face so long as the agent is wearing armor. The advantage of such explosive power is the capacity of the ammunition drum - essentially 24 weak grenades - doing minimal damage to bulding internals but causing injury to groups of hostiles up to eight cells away from the impact point. An agent with low accuracy but reasonable strength would be best suited for this weapon and ammunition combination, from a medium range, and used carefully to avoid friendly fire. Any unit hit with the projectile will also suffer impact damage equal to the explosive damage.
Incendiary (IN) ammunition for engulfing small groups of hostiles in flames. Ammunition quantity is adequate. Any unit hit with the projectile will also suffer impact damage equal to the incendiary damage.
Note: All effects based on incendiary damage are identical.