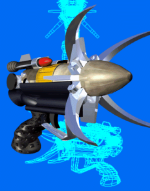 This weapon does not injure any entity instead it is used to incapacitate the target from close range. As a reasonably accurate weapon, its short range limits accidental stuns due to overshoot. This weapon is best used as a backup in the earlier stages of the game to stun aliens that happen to get too close, especially for those aliens that use melee combat methods (Brainsucker and Hyperworm).
The weapon's primary role is to stun alien life-forms for capture and research.
Ammunition is not needed since it slowly recharges its five shots. This standard weapon is available on the market in reasonable quantities and will eventually become common equipment for X-Com agents. If a strong alien is to be captured, the target's health must be reduced for the stun effect to work properly. Any unit which is equiped with a Personal Disruptor Shield will not be affected by the stun effect, thus, other stun methods must be used.
Note: stun 'damage' is limited to 255. Strong, healthy aliens must be injured until their stun level is higher then their health for the entity to fall unconscious.