Night missions are very challenging as the visibility is about a third of day missions. It is possible to avoid most night missions by delaying your landing until daytime. Night Terror Missions will disappear before daytime unless you can keep the site continually targeted with different aircraft by using an exploit. If you only have one Skyranger you may find yourself landing at night.

The most important additional operation in night missions is to manage your illumination. It comes in four varieties - flares, fires, artificial lighting, and personal lighting. But first, an important message about alien night vision.

In full daylight, every unit in the game can see up to 20 tiles away (counting from zero where the unit is standing), not counting obstructions to line of sight.

At night, your agents and tanks cannot see enemies that stand in dark places. Personal light carried by soldiers illuminates enemies up to 9 tiles away, but aliens can still see 20. Aliens always see the full 20 (and night missions can end in disaster!) Anything you do to improve lighting only affects you. Your flares do not make you more obvious to aliens, etc. - aliens can always see just fine. Aliens under X-com mind control can see 20 tiles away.

Although dusk or dawn battlescapes use a darker palette than full daylight, there is no visual range in between day and night: it is either 9 or 20. The geoscape displays a band of dusk/dawn between day and night areas; when entering combat, you will get daytime visibility in the lighter half of this band and night in the darker half.

Note that visual range and lighting rules ignore elevation levels. If you can see 9 (or 20) when both you and your visual target are on the ground, you will also be able to see them when you're flying 4 stories high and they're on the ground 9 (or 20) tiles away, ignoring vertical distance. Elevation differences do not add to distance for vision and lighting. 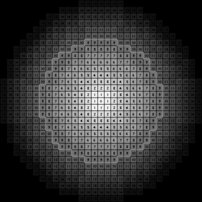 Pattern of light produced by Flares and Personal Lighting. Numbers refer to value that palette is shifted to darker colours. Line shows effective radius - outside it light is purely cosmetic.

Start combat with some of your soldiers holding flares. The first soldiers shown on the combat load-out screen will be the first out the door. The smallest number of inventory TUs are needed to move something from your shoulder to your hand (3 TUs), although the belt and leg are a close second (4 TUs).

Key advantages to flares are that they never "burn out", and they can be picked up and re-thrown, including as part of a grenade relay. Leapfrogging flares reduces this important count against your 80 item limit. Usually one throws them to the places they want to walk to, or which will reveal the most "around corners", but read onward for the most efficient throwing patterns. A key disadvantage of flares is that they are always destroyed by any explosion they're caught within; indeed, they have the weakest explosion resistance of any item in the game. So you might think twice before fragging an alien revealed by a flare - or you might very well not!

Flares cause a circle of light of effective radius 9 (not counting ground-zero tile), diameter 19 (including GZ). Graphically radius is 15, but at the edge there is not enough light to reveal enemies. They cast the exact same amount/pattern of light as Personal Lighting (below). In real life, something seen in very dim light would probably only be visible to the closest person, but this is not the case in X-COM. If anyone can see an alien, everyone can (as long as they have Line of sight). (In fact, even if NO ONE can currently see an alien, but someone spotted him during the turn, everyone can see him. Very important for sniping purposes. I guess everyone's in radio contact.

Due to the fact that both soldiers and flares have radius 9 light patterns, flares should be thrown approx. 18 tiles away (laterally; less for diagonally) for complete coverage. Of course, this doesn't take into account that you will be moving, etc. Likewise, flares should be about 18 tiles away from each other. A hexagon of flares around a soldier will cause almost complete coverage out to approximately 27 tiles -- further than your visual range.

It is possible to see the outline of an alien against a light backdrop if you get lucky, even though no one can "officially" see him (and get the glowing red number). This can happen if, e.g., the alien is elevated. The edge of a lit area (9 tiles from a flare or soldier) is extremely dim, making it impossible to see an alien just in front of an edge. But an elevated alien is in profile against farther, less-dim parts of the illuminated area. It can also happen in situations where an alien is just off to the side of a well-lit area, due to light being blocked from hitting his tile by, e.g., the corner of a building.

Using the throwing formula vs. flare weight of 3, the weakest soldier (STR 20) can throw a flare approx. 17 tiles, and the strongest soldier (STR 70) can throw it approx. 58 tiles - all the way across even the largest map (except diagonally). BUT, as pointed out by NKF, there is an unfortunate limit on how high an object can go before its arc intercepts the fourth-level "ceiling", which causes the confusing/annoying "Unable to throw here!" message even when the route is obviously clear. Ceiling interception appears to make the actual maximum throwing distance approx. 35 tiles. (More testing needed, pls.)
Unfortunately, the stronger you are, a greater percentage of your possible distance gets clipped, but even fairly weak soldiers may see some clipping. (THAT'S why we often get this frustrating message when trying to throw flares as far as we can!)

For what it's worth, flares that are dropped or picked up do not change their light status until the start of the next turn. To wit: If you drop a flare and walk away, it does not give illumination until the next turn. (Not that it matters, since your soldier had the same range-9 lighting as the flare when he was standing there.) And if you pick up a flare and walk away, its lighting remains behind until next turn. Conversely, if flares are thrown, they do immediately light up their area.

As discussed under Flares (above), soldiers can see to a radius of 9 around them, and are effectively light sources exactly equal to flares. This does not matter to aliens; they always see the full 20, day or night.

If you have just mind controlled an alien, you will not get its personal lighting until you move someone (including your new pet alien, or any other MC'd aliens). For these purposes, turning in place does not cause personal lighting to come on - only actual movement does. Since movement of your new pet can trigger reaction fire, move one of your 'back field' troops if you want to light up the pet's area while playing it safe re: your new pet drawing reaction fire. Note that turning in place also does not cause reaction fire.

More specifically, aliens do not check for personal lighting status change until someone on your team uses energy. For example, using an elevator or flying up/down will not cause newly-MC'd aliens to light up. This also means that aliens that you MC'd last turn, will stay lit this turn, until one of your guys moves in a way that uses energy. This might be useful on night missions or in those dark, windy alien base 'gardens' - at the start of a turn, aliens you MC'd last turn stay lit until one of your soldiers moves. Then again, while all of this is true, you will still get the glowing 'alien seen' number, even if you do move - and it's the most important thing of all, by far. Perhaps these insights will help, some cold dark night.

Incendiary ammo also provides light, plus it can travel further and do some damage if it hits the enemy. It does not do very much damage, so never rely on it to kill an alien.

Pattern around map tile on fire is identical to those of flares and personal light.

Load up the Auto-Cannon with Incendiary before starting the mission. Use on snap-shot to light up the depths of the map, further than flares can be thrown. Give the soldier a back-up pistol. Incendiary ammo is also available for the Heavy Cannon and Rocket Launcher, but the Auto Cannon's fast shot makes it best for the mission - a soldier can still use his pistol the same turn. Incendiary rounds detonated into the canopy of a forest will still cast light on the ground but without the troublesome fires which hinder movement.

Enemy units on fire do not provide any light.

Certain items in the game produce their own light. This can be a big bonus on night terror city missions. Explosives and shots that can destroy the object will stop the lighting (see terrain damage here).

There are 11 terrain items that produce light:

This is the colour palette used by UFO: Enemy Unknown.

Note: Because the palette (see image to the right) uses 16 hues ranging through 16 shades of brightness (256 colours), it's assumed that the brightness value simply tells the tile how many shades to scale each colour down from full-bright.

Ones that were checked (street lamp and liquid containers) were found to also illuminate aliens within 9 tiles of them, even though these two object types cast very different light. (The street lamp casts a lot of light; the containers only cast a little.) Thus it is presumed that all light sources give the ability to visualize aliens up to 9 tiles away, regardless of how much light they appear to cast.

See byte 58 of the MCD file structure for more info on lighting data.

For those techies who like to look Under The Hood, the X-COM engine handles varying levels of illumination quite cleverly. The palette is arranged so that the base colours of a tile can be added to the degree of illumination to get the dimmer colours.