This is here as to not clutter the bugs page. 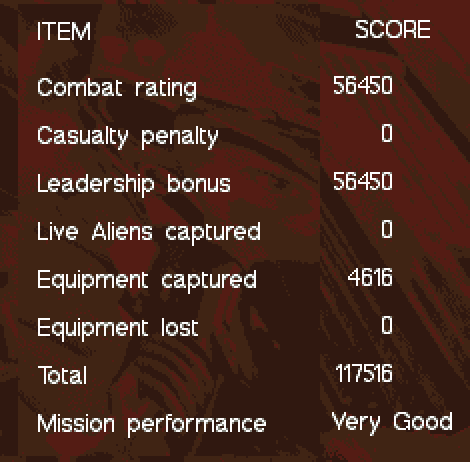 This was a 27hour (real life, using x4 speed) stress-test mission within the Spawning Chamber (it has the queen) using edited lifeform selections to get a uniform result and limit variables. Aliens

Notes: 668 anthros killed according to score. Add up quantity of aliens killed (8xagent's kill count from zero) and it becomes 913 kills! So now it looks like Combat rating is not correct versus actual kill count. This is becoming a headache. Items again surpassed limit and are exact as before in Test 1 and 2. Active combat timer is less than 4 hours now, being ~220minutes and also again: item drop qty does not match with alien death qty (913) but it does closely with combat rating 668 vs 666. Test4: Sleeping Chamber
Gametime: doesn't matter since it was corpse recovery test but it lasted a few hours.
De-Brief:

Notes: Using new setup: Anthros + Brainsucker Launchers(Score=1) with no ammo. Agents x12 with only LawPistol (recharges). No armor, no cloak. 704 kills so far since ended mission early. Items recovered (confirmed at base) = 704 brainsucker launchers + 48 corpses. Scores match now. What is the upper limit to kills since it is confirmed that 60 is the unit/corpse limit.
Test5: Sleeping Chamber

...but not without some help. Since it is known that old corpses will be removed if there are too many just before a new spawn appears, there is a way to make spawn unlimited. Equipment dropped by the dead must be destroyed!
The items on the ground will limit the spawn quantity. This confirms that there is an item limit (unknown exactly): approximately 750 items in total.

To make it easy: know which aliens can spawn, each bulding's timer, face agents towards the center of the battlescape if they are near the map edge.

These are ongoing tests whenever...

There is a critical bug which is caused by too many items on the ground regarding overhead view.