The Organic Factory is the eighth building of ten in the series of alien structures. 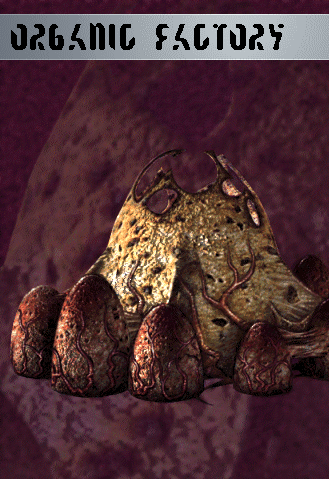 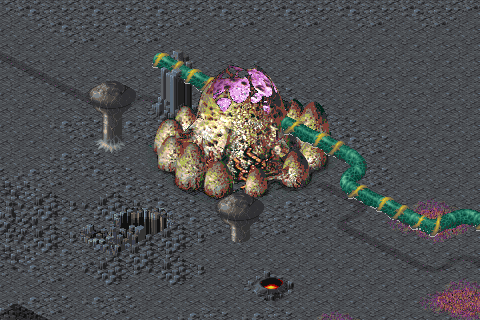 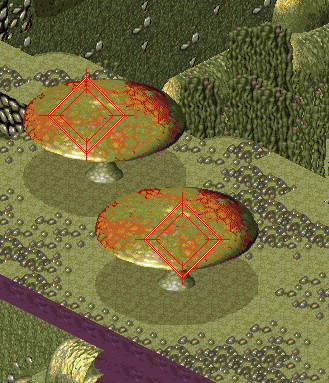 This building has three areas which contain the mushroom-like objects (shown left). There are ten large mushrooms in total which are not resistant to damage. Destruction of a embryonic UFO will cause medium sized explosion from all the individual tiles which explode individually.

The alien battlescape is seven levels high.
A rock-embedded terrain with high platforms, many acorn type plants, and some blue-exit-tiles only reachable by flying units. The objectives are scattered around the factory and are found mainly at higher elevations. They detonate easily from nearby explosions or from light weapons. The shadow can be shot which affects the giant mushroom, somehow.
Explosions and terrain destruction can limit ground based units from accessing the high, brown and grey rock walkways but this should not prevent targeting and destruction of any objective. Destruction of level one supports can allow death-by-squashing from walkway collapse whereas some walkways will become suspended and not fall as expected. If continued fighting around these compromised features, collapse may start unexpectantly. X-Com units should not be under any nearby overhang since massive structural failure is possible and death comes easily!
There are numerous one-cell budding UFO 'plants' which some larger ones are explosive, with the taller mini-mushroom having a double explosion. Any detonation is small. These various mushrooms are not part of the mission objective but provide excellent cover. There are over 100 small mushrooms of various size.
Oddity: The mushroom objectives can be destroyed by shooting the ground adjacent to shadow. The collision detection is not aligned correctly or has been made too large for the structure.

Re-Inforcement Timer is 20 seconds.
Three locations unique to the Organic Factory. Four pads each. One location contains the supporting scaffold of a large circular platform which connects to walkways containing seven objectives. These four pads are exposed and easily damaged from errant weapons fire. The growth of four explosive-barrel plants per pad seems to be intentional. The second dedicated orange pad location has the typical boxed, brown rock enclosure and contains a grav-lift as it is situatated in a depression. The final pad device surrounds a large 3x3 grav-lift which becomes a 1x1 grav0lift at elevation. This battlescape segment has four corridors in a cross shape which are supported underneath and not prone to collapse from explosives.