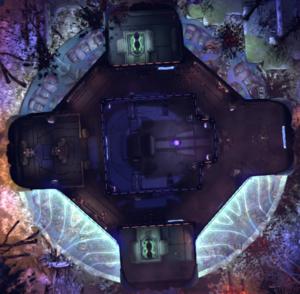 This UFO only appears after the Hyperwave Relay is built and will never appear again once it is shot down and assaulted (though there is a minuscule chance that the game may schedule two instances close enough to swat down and assault both). It has about the same size as a Large Scout but with a different inner design, consisting of a central bridge that can only be accessed through one door, unlike the disposition of the scout craft.

A Firestorm will shoot it down without much difficulty. Otherwise, if you're using an Interceptor you'll need all of the 3 (Aim, Dodge and Boost) modules to have a chance of bringing it down.