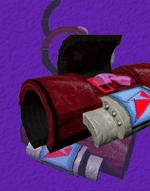 The Personal Teleporter, image from the UFOpaedia

The Personal Teleporter is the final alien artifact you'll encounter, and the most powerful Quantum Physics research topic in the game. Teleporters allow instantaneous movement to any location on the map for any number of conceivable reasons that you can think of. Agents with properly used Teleporters are practically unbeatable, though the methods differ drastically between real time and turn based mode.

Despite the official entry, the Teleporter has unlimited range and depletes the entire battery with each use.

Teleporters will give an error if the destination is obstructed. If the location is in mid air, the Teleporter will not activate unless the agent has flight ability from Marsec Armor. They can move agents into the fog of war, allowing instantaneous map crossing maneuvers.

Official Entry: "This extraordinary device uses inter-dimensional capability to transport the user over short distances via a dimensional flux. The energy level depletes according to the distance jumped, but it recovers over time."