Originally created by Psyke, the Psiclones soon became the ultimate psychoactive drugs and the primary cause of gang warfare in Mega-Primus. Megapol's proactive confiscation of Psiclone implants has only managed to keep prices high. To X-COM – paid to fight Aliens and not to keep the peace in the city – the Psiclone market can be a valuable secondary source of income.

Psiclones are most commonly found in gangs' slums, but the Cult of Sirius also possesses them, presumably for use in their religious ceremonies. 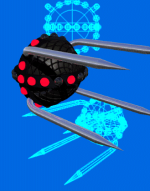 "The Psiclone implant is manufactured and distributed by criminal gangs. It allows the user to experience any mental state or images just by imagining them. Its widespread popularity and detrimental effect on the health of young citizens led the Senate to ban the use or distribution of the device. The price of Psiclone implants has subsequently soared and this has resulted in open warfare between the criminal gangs and Megapol."