Raw recruits have the following possible statistics. Range (Min to Max), Number of possible values (Max-Min+1), and Percent chance of getting any one of those values (1/Values). Also, caps are shown for your convenience: 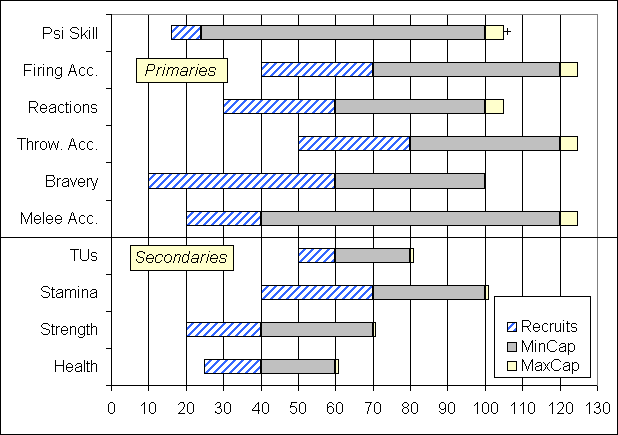 Primary stats are Psi Skill, Firing Accuracy, Reactions, Throwing Accuracy, Bravery, and Melee Accuracy. Secondary stats are TUs, Stamina (a.k.a. Energy in combat), Health, and Strength. Secondaries increase whenever a Primary action is taken (except for Throwing). For more info, see Experience. Psionic Skill is the only value that can increase past its combat cap (via the Psi Lab). (In theory, a soldier can improve his Psi Skill to 255 with the Lab, at which point it wraps back to 0 - but this would take six years of game time.)

As discussed elsewhere, initial TUs/3 (not total TUs after increases!) govern energy recovery on the battlefield. In other words, your raw recruit's TUs forever after determine how much energy they recover each combat turn. 50 recruit TUs means you recover 16 energy per combat turn; 60 TUs means you recover 20. This gives TUs more importance than you might expect, and makes 60 a pleasure to see.

There are six sets of first and last names, each containing 20 first names and 20 last names. They are ostensibly American, British, French, German, Japanese, and Russian. Soldiers' first and last names are randomly chosen from a single set; thus, there are 2,400 possible unique names (20x20x6). No differences due to nationality, names, etc., have been observed - all stats appear to be entirely random. In each of the six name sets, five of the first names are feminine and the other 15 male; thus, one fourth of all recruits are female. Being female has absolutely no effect on stats or anything else in the game, except for the obvious graphics differences and death sounds. For more detailed info on soldier names, see Soldier Name Stats.

The Melee Accuracy stat is not shown in displays anywhere but it increases (and secondaries, too) if you use the stun rod. The programmers appear to have put it on the back burner for XCOM, but it does get used more in TFTD.

And now for some useless trivia:

And now, back to our regularly scheduled wiki.