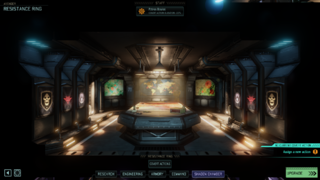 The Resistance Ring is a new facility introduced in WOTC. Here you can view and run various covert actions with the various hero factions. A covert action can be run once a month in which this building is required in order to run beyond the given one. An engineer can be staffed in order to speed up the rate at which your soldiers complete covert actions and can be upgraded to have an additional slot to staff. Resistance orders are a new mechanic introduced in WOTC in which certain orders can be slotted to grant additional bonuses and viewed within the resistance ring, in LWOTC this mechanic is disabled by default but can be re-enabled through the advanced options upon campaign creation.

An engineer can be staffed to boost covert action completion by about 50% and an additional 33% with a second staff member which can be slotted when the upgrade has been purchased.

Covert Actions are background missions your soldiers can run in order to accomplish various objectives to obtain certain rewards. In LWOTC, these covert actions have a chance to fail based on the difficulty level of action being accomplished and the global force level (failure increases by 4% per force level up to level 12) which can be reduced by sending soldiers of higher ranks. There are three difficulty levels of covert actions with rewards being proportionately better with difficulty and only some can be launched once a given faction's influence is of a certain level.

Faction influence can be increased by completing "hunt the chosen" covert actions (influence is increased by liberating regions if chosen are disabled).

All covert actions also have a chance of ambush starting between 5-10% and continuously increases the more actions that are completed without having been ambushed previously which then resets once it occurs.

These Covert Actions don't have an associated difficulty level and can't fail.