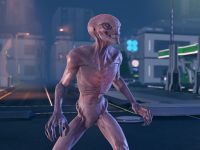 Since the original invasion, Sectoids have been hybridized with human DNA, apparently across the entire race. No 'original' Sectoids seem to remain. The 'new' Sectoid has greater physical stamina and psionic potential, as well as such human features as walking upright and having a visible jaw with teeth. Their skin color has also changed to be more similar to their classic counterparts.

Sectoids fit a support role for enemy groups, often accompanied by ADVENT troopers who handle the damage dealing. Their two Psionic abilities - Mindspin and Reanimate - are their main function, providing disruption amongst XCOM's forces and cheap, expendable bullet-sponges from nearby corpses.

Sectoids carry a wrist-mounted plasma pistol, though they rarely make use of them. Despite the genetic modification, they are still averse to close combat, and take double damage from all melee attacks.

Sectoids will only use their wrist-mounted weapon as a last resort or in extremely opportune circumstances, generally prioritising psionic abilities far higher than dealing damage. Their Psionic attack, Mindspin, is on a one-turn cooldown, so a Sectoids attack pattern will typically follow the route of Mindspin, Re-Animate (if humanoid corpses are available, otherwise move/attack), Mindspin, move/attack. Even easy flanks and low-cover targets don't divert a Sectoids focus from using their Psi powers if they're available.

A Ranger with Blademaster will, if they land a melee attack, always kill a Sectoid in one hit. However, a mind-controlled Ranger can be a very dangerous thing if left to run rampant.

A Mind Shield will make an operative immune to Mindspin, but will not stop a Sectoid from targeting the shielded creature, potentially wasting their turns.