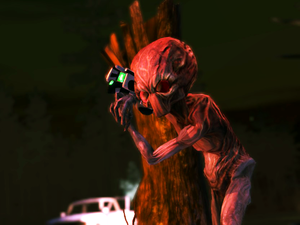 The Sectoid Commander makes a non-interactive appearance in the tutorial mission if you have it enabled, but your first proper Sectoid Commander encounter will be in the Alien Base. After that, they will be at the helm of UFOs right up until you assault the Overseer UFO, at which point they are permanently replaced by Ethereals. These aliens have the ability to mind control your soldiers and after the alien base assault they will always deploy in groups of 2 or 3. Allowing them to live throughout the alien turn can be an extremely dangerous (and deadly) experience due to their psionic powers.

In the Enemy Within DLC: once 'unlocked' in the Alien Base Assault, they will still make regular appearances, with one (often also with a regular Sectoid) or two combined with a Mechtoid, even after the Ethereal Device is captured.