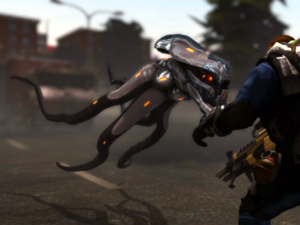 The Seeker is a biomechanical hover unit with a squidlike design, somewhat visually similar to TFTD's Tentaculat (reinforcing this, the Autopsy's project name is "Lovecraft", whose writings were a primary inspiration for TFTD). Its specialty is the ability to become invisible to your soldier's eyes. It was introduced in the Enemy Within DLC.

Seekers operate as hit and run units that will use their stealth (a.k.a. Cloak) to approach lone soldiers (such as Snipers with Squad Sight) and then use their special grappling attack. The victim will not die immediately, but cannot undertake any actions and will take damage each turn until the Seeker is killed or releases its victim. After a soldier is released from strangulation they will have to catch their breath, taking heavy penalties for the next two turns. Seekers also have a weapon similar to a Plasma Pistol that they will use on any target they cannot effectively isolate or grapple.

Seekers are immune to the Flamethrower. They can be detected through the Battle Scanner and the Bioelectric Skin. The Cloak depletes during movement, behaving rather like the flight mode of Archangel Armor than the cloak of Ghost Armor.

This last characteristic can also favor mobile squad tactics rather than fighting from a fixed position since it forces Seekers to spend more of their Cloaking ability to approach a soldier and risk running out of cloak upon open sight of your troops. That is, assuming soldiers are running away from the hidden Seeker rather than towards it.

The Seeker's Strangle ability cannot be used when the Seeker is visible, and it is the only enemy that can occupy the same space as another unit. It cannot grapple the heavier late-game armours, and MEC Troopers are also immune.