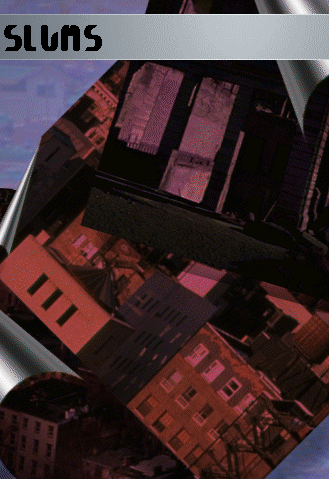 All slums are nine levels high with terrain which is diverse. Flat open areas of dirty woodland to large derelict buildings for squatters.
Aliens will move about in large loose groups unless eggs or coccoons need protection. Searching rooms can become (very tedious in Turn-Based combat) easier if a motion scanner is used. Trapping a hostile in a building by demolishing parts of it is an easy method to isolate an alien if needed for a later stun, or target practice if not. Hit-and-run style of fighting may be a better option within areas such as grasslands (weak cover) or roads (no cover) if not using smoke. Flying and dropping bombs/gas, hiding on the roof with snipers or grenadiers, ambush with swords in a corridor is an easy method to neutralise dangerous units. Splitting a hostile force into smaller groups is possible by removing walkways, stairs, etc. since some units cannot jump.
A dirty blight on the sterile city of Mega-Primus.