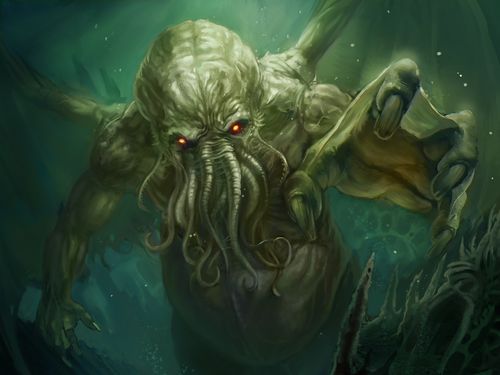 This is a conversion of Seb76's UFOloader. Xusilak released a prototype, called TFTDloader, that offered players the ability to run the CE, or Gold, version without video problems in September 2010. He made a lot of notations on various subroutines and variables used throughout the executable. In March of 2012, Kyrub released an updated version called TFTD Extender, which had limited functionality. When he became unable to continue development on his project, Tycho released another version called TFTDextender, which was based on Xusilak's original code and had more functionality than Kyrub's version. Almost all applicable fixes and mods that were made for UFO Extender have been successfully imported and new mods and fixes specifically for this game have been added since the initial version. Version 1.02 was released in June, 2013.

The extender patches the program in memory, it does not modify the executable. The advantage is that it won't change the file on disk so there is little risk of destroying your game installation (still, it is wise to do a backup of your game folder before using this). It also means that any data mods that one may wish to use should not conflict. Of course, if your computer stops responding and starts chanting verses in an inhuman language, I don't take any responsability...

Some changes are recorded in a game's save files so be aware of this fact when you change options and wonder why some changes don't work on games already in progress. Changes will require you to restart the loader to have them take effect.

Feel free to contact me with any questions and please don't hesistate to report any problem you encounter with this, I'll try to help you fix it. Tycho
You can also reach me through the StrategyCore forum for TFTD Extender[1], where also I am called "Tycho".

NOTE: This program only works with the Windows version of Terror from the Deep (usually referred to as the Collector's Edition (CE) or the Gold Edition). It is not compatible with the DOS version nor will it run through DOSbox as the memory handling and offsets are different.

-You need a program able extract zip files.
-Extract the full version first and then the patch. Click "Yes" to overwrite the current file.

-Look at this page or refer to ExtenderINIref.txt in the TFTD game directory for exact details on each option.

-The program looks for the file named "Terror from the Deep.exe" but this can be changed by editing the line under the section marked [Loader] at the beginning of the TFTDextender.INI file. (enabled in version 1.6).

Why don't I have music after installing the Extender?

The CE version uses midi files for the soundtrack. Some digital downloads are missing the midi music in the SOUND folder. They are provided here: File:TFTDmidi.zip

Problems with mp3 playing: Crash or no sound

This is usually a codec problem with the OS music player. See this discussion on how to isolate and resolve this. [3]
Starting with version 1.07, a new way to play music has been implemented so mp3 playback should work despite codecs.

When I run the Extender, I have problems loading or I get garbled graphics.

The initial settings in the INI are very basic since user preferences and systems are so varied. It is up to the users to configure the INI file to their needs. Some graphic cards have a problem with the initial video settings and require D3D to be enabled. Others may need to disable even the basic settings if they intend to use another mod program, such as XcomUtil.

I get a crash message as soon as I run the Extender.

(1)This can be caused by not having the video options configured correctly. Try enabling D3D in the INI.
(2)Disable the option to skip the intro movie, especially if you are using a split executable such as with xcomutil.

Kyrub identified a problem with the way XcomUtil splits the executable. Bomb_bloke wrote an updated splitter: see this discussion [4].
There now is an option in the INI to disable error messages.

The game crashes as soon as I choose to go to T'leth.

There is a problem with some movie files with some digital downloads of the game. Bomb Bloke wrote a set of dummy files which will let the CE version continue to the final battle. Check out this article[5].

Extender and modified game executables: These may work together but there is no guarentee. Some heavily modify the binary and trying to patch on top of it will produce unexpected data corruption or crash the game. Even splitting the executable, such as done by XComUtil, causes problems.
DAT file mod requests: DAT files modifications are not done because there are already lots of them and various data editors available to do them for yourself. This rule allows all data mods to keep working with the loader (that is why some xcomutil features should still work, as long as they are those only based on resource modifications). Any bug fix that requires a change to some resource data in order to compensate for the fix, will have an option to exclude the data change so that any player changes will not be overwritten.

By default most bug fixes are already enabled; there is a section in the INI for bug fixes in case you want to disable a fix. A complete list of these fixes are listed in the file, TFTDbugReference.txt. To disable a fix, simply open this file and copy the appropriate line to the [Bug Fix] section of the INI.

These settings are exclusive of each other: Some work together while others will override the previous level: [initial] video pitch -> HQ4x -> D3D -> D3D&HQ4x [highest scaling].
If the initial Video Pitch option doesn't seem to work, use the D3D option.

These options only apply when you run the game in full screen mode:

Other Video options that work in either windowed or full-screen:

Each level stacks upon or replaces the previous set of changes.
Note: Some changes will be stored in the game's saved files and cannot be altered again except by editing these files directly. There could be some issues with the availability of certain research topics if one changes the option for a game already in progress. 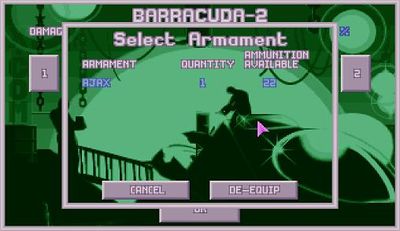 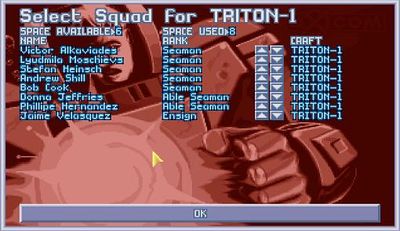 Caution should be used with this mode, as it can drain resources quickly. 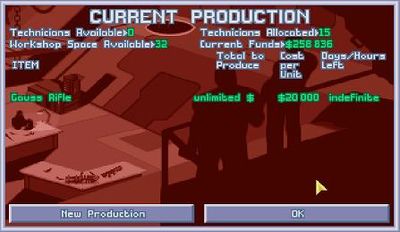 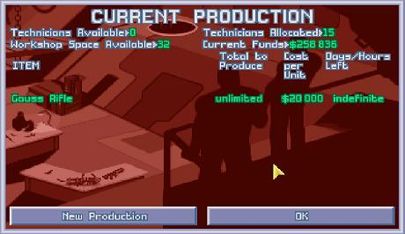 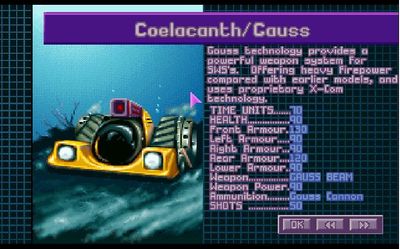 Our recent research on the alien scanning device has allowed us an excellent opportunity. We can devise improved detectors that will emit a small pulse and triangulate on any alien implants that respond. You should be able to determine the general direction and range. 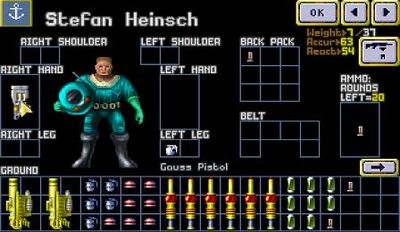 Localization strings: add the following strings to the end of the equipment section and change the text between the "=" and ">" to match your particular language. English is the default. (available with version 1.05p3). Examples are for English:

This feature makes the aliens slightly more aggressive. Melee Terror Units are less indecisive when attacking. Player can choose the distances (in tiles) that aliens will attempt to use auto-fire and snap shots. Aliens will make targeted shots for ranges beyond snap shot. A scaled-down version of Kyrub's AI model. Thanks to Kyrub for providing the data point information.

Apply: Set to 1 to enable this feature.
Minimum Efficiency: The efficiency will not decrease beyond this limit for range. [-50% = 25+ tiles]

Line of Fire Check for M.C.

Soldiers with MC ability and items that utilized MC will require the individual soldier have LOS to use the item as selected by the player.

Change any option to 1 to enable the feature.

Allows the player to rearrange, add, or remove any module to the initial base at the start of a game.

Possible modules [use this notation in the INI]:

Change the value of some OBDATA.DAT settings on the fly. To change a value, add a line "itemname setting=value" (without the quotes).

Apply: Set to 1 to enable this feature.
Source: choose which option by removing the ";" from the front of the line of your choice and adding a ";" to the beginning of the other line that you wish to disable.
CD Drive: change to the drive letter of your CD/DVD ROM drive. (if applicable)
MP3: You should create a folder labeled "MP3" in the same folder as your TFTD executable.

If you have the PSX version of the game, you should be able to enjoy the CD music with this patch. (experimental)

If you have mp3 music files available for the game, you can use them instead of the default MIDI ones (see the INI file for examples). Terror From The Deep Soundtrack

You can raise the maximum value that the soldiers' stats may increase in the course of gaining experience from combat.

Apply: Set to 1 to enable BattleScape or GeoScape shortcuts.