Someone should make a tutorial on how to use those darn things.

I never manage to get a grasp on how to use it effectively. I often found it easier to turn my soldiers around in circles to clear my immediate vincinity. Maybe a image of the motion detector screen, and another to show the positions of the aliens and how it relates to one another?

It's not terribly difficult to use. All it does is pick up movement. Nothing else. The main use is to check for movement of units in an enclosed area - i.e. the UFO or a building or even the outside of the Skyranger before you embark after waiting the first or more turn.

The orientation is simple. It's the same as the overhead map. Top is North, then clockwise it's East, South and West. The numbers on the rings on the screen represent every tile away from you. It goes up to 8 or 9 rings, so that's a 9 tile radius. Which is coincidentally your visual range at night, so there's absolutely no point in using a motion scanner out in the open.

Using soldiers as an example, when no movement has occured, you'll get nothing on the screen. 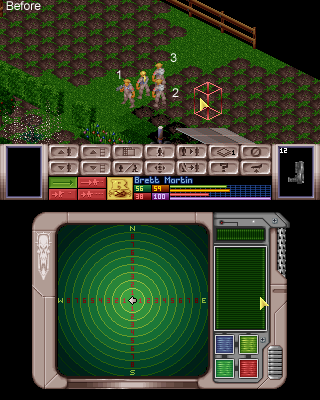 After movement, units that have moved will register on the display. Note that the more they have to walk, the larger their blip on the screen. 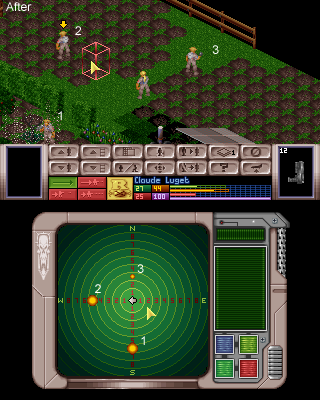 That's it really. It's useful if you've got a wall and cannot see what's behind it. Out in the open, it's utterly useless.

Off the top of my head, I can describe one case where it's useful: if I'm using Proximity Grenades outside a UFO and there's a pile of stuff I don't want to blow up, I'll have a soldier beside the UFO use a scanner to see if an alien's in the antechamber, ready to exit. If not, I can risk grabbing extra stuff without having to get back into "safe" position.

There might be cases where if you see a single "big dot" inside a UFO, it might be safe to enter since the alien will have used up most its TUs. I'm not confident this is a reliable indicator, however. I sometimes watch a dot from turn to turn to see which way it moves, which at least gives you some warning that an alien's probably on its way out.

The biggest problem with scanners is the false negatives: if you scan no movement, that either means there's no alien, or that there's one that's got all its TUs (very dangerous). You can't assume that the absence of a dot is the absence of an alien.--Ethereal Cereal 02:16, 16 March 2007 (PDT)

That's its biggest limitation. It's only good in a "something's moving over there!" way. You otherwise can't be sure what is over there, except the alien that moved. About the best you can do is deal with it by readying an ambush (such as the case of a UFO assault - which you should already be doing automatically anyway so a scanner isn't necessary), before deploying from the Skyranger after waiting a few turns (about the only place I myself actively use it - it identifies movement beside or behind the ramp) or if you're in, say, the orchards or behind the grass hedges and you want to pinpoint the exact location of an alien you saw move into it. Mind you, a simple toss of a grenade is generally all you need to clear something like the orchards. Actually, alien bases and base defence scenarios are probably a good places to use it. Plenty of partitions and hallways, and in X-Com bases, you can have soldiers on the upper level or inside HWP closets scan the hallways to check if there's anything outside (and then get someone further down the hallway pop out and take it out).

It's one of those niche tools that can be useful if used right, but still won't be used too much when you've got other simpler and more efficient alternatives available to you. - NKF

I generally get the most use out of a motion scanner with the Large Scout and the Terror Ship. With both of these, it's possible to get relatively close to the center of the ship without going inside...which is useful for detecting when sprinting is/has remained "safe", after clearing the outside. Alien Bases are a bit open for my taste.

While theoretically possible, it's a bit harder to get effective use in: Farm, Terror, other large UFOs.

And, generally...use all motion scanners in position before moving anyone else.

Does anyone know the relationship between movement and blip size? Also, does it go off Time Units used or Energy used? There are 7 different-sized blips in the DETBLOB.DAT file, so does that mean there are 7 different levels of "motion"?

Nothing to do with energy. If I'm not mistaken, there's a separate stat unitref[062] that increments every time the unit walks, but not when other actions are performed. The amount it increments is based off the stat just before it in unitref[061]. Blip sizes are based off unitref[062]. -NKF

As a pre-emptive clarification, it should be noted that although it seems energy would work as a mechanism for determining it(because the only time you use energy is walking), it wouldn't. While it is true that X-COM soldiers and HWPs only use energy when moving, some aliens ALSO use energy simply while turning in place (rotation). This is determined by another stat that determines at what level energy is depleted; some aliens lose energy at the same rate as TUs spent on movement. This can be tested with a Psi-Amp and a few psi-competent troopers, as well as a few extraterrestrial 'volunteers'.

Also, do elevation changes trigger the motion sensor? We should try and find that out.Arrow Quivershaft 10:47, 23 December 2007 (PST)

I have investigated this for implementing the motion scanner in OpenXcom. So as said before, sectoids get 3 movement points (called it MP) for 1 tile movement, tanks get 30 MP/tile, rest 4 MP/tile. Blips are animated in 2 frames, so in fact there are only 6 sizes. The last(7th) blip graphic is just used for the animation of the 6th blipsize. Through some testing I came up with the following relationship between the number of MPs and blipsize:

Some interesting things to note: