From UFOpaedia
(Redirected from Tasoths)
Jump to navigation Jump to search

Bio-Drones may be found accompanying Tasoths on Terror Missions and during attacks on X-Com bases, while Tasoth crews of large Alien Subs, Alien Colonies and Artefact Sites will be accompanied by Tentaculats.

Tasoths will start appearing on regular alien sub missions from July onwards. You may encounter them earlier during a Ship Rescue Mission (from April onward) or an Alien Colony Attack Mission. 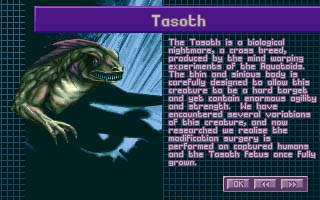