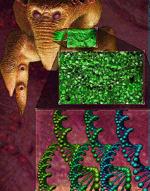 The Alien Genetic Structure entry in the UFOpaedia.

This is it! The reason for why you've been capturing these aliens alive and researching them and, later, their corpses. The prerequisite for this research is any one of the Multiworm Egg Autopsy, Multiworm Autopsy, or Hyperworm Autopsy. Notice that these are all autopsies, meaning that you don't need to bring them back alive. Still, it's useful for the next researchable item... Anyway, this leads directly to BIOLOGICAL WARFARE!! Yes, the toxins you've been waiting for have finally come! This gives you the research option of Biological Warfare, which gives you both the Toxigun and Toxin A, which is a pretty weak toxin. Hold out for the better toxins.