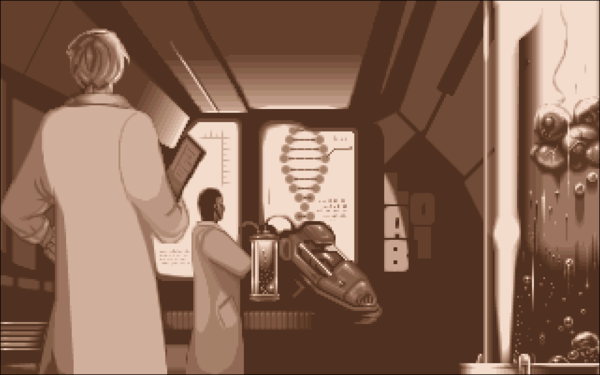 "Today a team of Russian scientists has retracted its previous claims of having synthetically manufactured Elerium. The team led by Dr. Baranov from the Moscow State University had announced last week that it would be ready to start a regular production of Elerium, the element which powered the Aliens craft and weapons.

According to Dr. Baranov the element manufactured didn't display any of the known characteristics related to Elerium and the team is currently trying reviewing all the procedures and protocols to try to determine the cause of the error. When Dr. Baranov was asked about how long it would take to resume production his answer was: 'At the moment it is impossible to determine a date'."

The failure to create synthetic Elerium has caused some scientists to call the element as 'Unobtainum' instead of using its scientific name of 'Ununpentium'. According to Dr. Jaime Ellis, a Nobel Physics laureate, "common opinion says that "Elerium E-115" is an element that supposedly occupies the position 115 of the periodic table and can't be found on Earth anymore after the last stocks were captured from the aliens. I'm not surprised by the team's failure, since production of such heavier elements is usually limited to a few atoms. And most likely they created something else that is not Elerium."

According to the story released by X-COM at the end of the war Elerium is a fuel capable of producing massive quantities of energy. The process also releases some quite exotic properties such as gravitational waves and the emission of faster than light particles, called tachyons, which can be used for real time communication across interstellar distances. "The truth is far more complex than that from what we actually know of Elerium. Yes, it produces those puzzling effects but no one has been able to explain exactly the process. It seems that X-COM scientists were merely concerned with applying its use to the battlefield than to understand how it worked. But for all we know there must be something else involved like dark matter or some other unknown physics that we are not able to understand".

"After restricting the area to prevent any unauthorized access, the recovery team moved to conduct an outside survey of the crashed craft. After an initial evaluation it was determined that the craft had a different design from any known UFO type reported by X-COM. Due to this the CO present decided to upgrade the security level of the recovery mission to CENSORED and to initiate safety decontamination procedures before entering the craft as background radiation levels increased while approaching the craft.

The craft was found to be nearly intact with the exception of a section on its forward section which appears to have been hit by a still undetermined weapon. It was through the opening that the survey team entered the craft since it was impossible to locate any of the usual doors associated with UFOs. The first discovery was the absence of any crew or their remains. The general impression was that any surviving crew members must have exited the craft after the crash through the hole in the front but a closer inspection revealed that there was no crew facilities or stations to man the craft.

As the survey team moved to the engineering areas it was discovered that it was impossible to continue due to increasing levels of radiation despite the use of environmental suits. It was decided by CENSORED to suspend all operations and prepare transportation of the craft to a location where it can be safely investigated."

"(...)The UNSC does conclude that there are no unaccounted Elerium supplies in the hands of other countries other than the governments of the sixteen nations that formerly composed the Council of Funding Nations. There is a possibility however that some Elerium stocks might have been recovered by other nations or private groups from alien craft that landed or crashed in remote areas. Although current intelligence discards that possibility it is unlike that they would be used as a Weapon of Mass Destruction due to their scarcity and potential high market value.(...)"