The House of HORUS 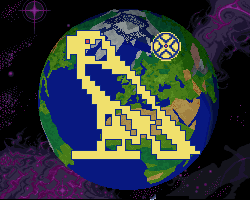 The history and objectives of HORUS to this day remain a complete mystery without any verified confirmation of the few information available. The first rumors about HORUS appeared during 1999 although at the time it was merely a name mentioned on bulletin boards all over the Internet.

It is unknown if the Council of Funding Nations had previous knowledge of this secret operation and it is also impossible yet to determine who were the entities originally responsible for the construction of the House of HORUS, the name of its main base, or their original agenda.

The significance of its name could give a few indications of the functions it perfomed. Horus was one of the major gods of Ancient Egypt, the son of Osiris, the god of the afterlife, and his sister Isis, the goddess of fertility. Horus was associated with war, the sky and was usually represented by a falcon. As described further ahead all of those are related with the roles that the House of HORUS performed during the war since of them can be associated with the facilities described at the base. A few theories have been put forward considering this information to explain the term HORUS as an acronym but there is no consensus on what it might describe.

What is known is that HORUS merely changed its name to X-COM in 1999 and started to have a more active and exposed role under their adquired cover. And there is reason to believe that after X-COM was officially decommissioned the HORUS project went back to its underground activities and is still operating today.

The House of HORUS

The HORUS base contains different areas:

Life Support Systems (base is completely autonomous from the outside)

Detention Area (where captured personnel is processed and held upon arrival)