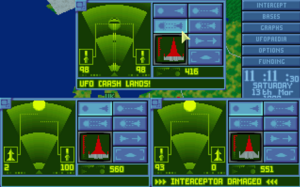 Every time the weapon from an interceptor hits, it will deal anywhere from 50% to 100% of the damage rating listed on Craft Armaments. If a UFO has taken more than 50% of its damage capacity in Interception damage, it will crash-land (assuming it is over land) and X-COM will be credited UFO Grounding points and can later launch a UFO Crash Recovery raid to clean up anything left.

It should be noted that most UFOs yield enough points in recoverable loot to make it preferable to ground them, instead of destroying them. More to the point, UFO Crash Recovery missions yield tactical experience, salable loot, and researchable items, all of which are essential to winning the game and usually (but not always) more important than scoring points.