Hi all! My name is FUEL and I'm a player of UFO2000 and the founder of the UFO02000 tournament & community site http://www.7kplay.net. Im not a member of the UFO2000 development crew, i'm a player just like all other players. I'm 28 years old now in 2009 and I'm from the Netherlands and live in Amsterdam. I teach PE and I am doing a Master in Human Movement Science. (Doing Research on advanced training methods for top-athletes and research on improved medical revalidation training methods. Basicaly lots of calculating and innovating) I'm not a fan of putting names on internet so you'll have to do with FUEL, sorry!

Playing single player campain games i play with the name GKAR. The name G'kar came from an alien in the Babylon 5 series. I choose it because it was a very devious character and has freckels all over his face. You've guessed it: I have freckels too but not as much as that alien though :). For online games i usually take GKAR2000 as my name. This name I came up with when i registered for my first game online account. Since GKAR was already taken for that game (don't remember the game) I added the year it was in: 2000 to make GKAR2000. It kinda stuck. As a UFO2000 player I thought I'd start out with a name as a sort of training account. So i came up with the name FUEL. FUEL for me stands for progression and learning. It stands for our way of living as fuel is the essence of our materialistic and capitalistic view of the world. We cannot cope with this correctly as fuel (fuel as in everything we use from our planet) and it has thus become the new religion as in the cause of wars. So since we are learning to cope with fuel i thought FUEL is also a resemblance of me as a player. Since I started to play I grew an interest in webdesign, programming and artwork. I decided i wanted to learn how to use HTML, PHP and how to make some creative artwork on a PC. So even after I as a gamer came out of the learning phase I decided to remain playing as FUEL as long as I am learning other stuff which has relation to UFO2000. When I started http://www.7kplay.net I started to play with <7K> FUEL.

I found X-Com right at the start of when it released. I just bought my first computer, a Pentium 166MMX and I wanted to play a game. Since i was a fan of strategy games like Dune 2 the shop assistant advised me this strategy game. I played and am hooked since. TFTD i also bought right when it was out because the x-com game was such fun. I bought both games on two trips to America.

I do not have any other accounts or aliasses at ufo2000 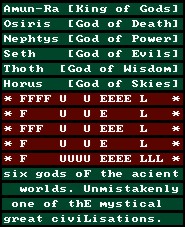 I have no setup which I use all the time, I make a new one every game. I tend to use 4 mutons, 1 sectoid and 1 floater setup most. Guns differ but the floater usually has a XAAS.

As said I started out playing in the abandonia 7k tournament. It wasn't a very good because the time the tournament took was ridiculous (over 6 months). So i thought: This is really fun, but i can do better! Since then i began making a site in which should be more easy and fun to play ufo2000 tournaments. The first site was also my 1st site ever! It was http://www.7k.741.com and wasnt a very good site. Since then I've learned alot about sites. http://www.7kplay.net is my second try but i've read alot about html programming since last try. Many things on this site are still very easy to create and big parts of it is all pre-made and stolen/copied html :) ! it doesn't take a wizzkid to make this site, trust me! As I'm learning HTML and PHP the site is updated a lot. First I think about what i would like to see updated or added and then I just start reading and learning how to. The ultimate goal is an almost automated tournament site.

I write the php and html is several programs, the layout is a web based editor, the content is written as pure/raw html/php/flash. I use the web based editor for the easy parts like pictures and iframes. Dreamweaver for the difficult bits, for me this is registration forms and forum mods. The Forum structure and capabilities are phpBB3, the mods (Points, Announcement centre, Medals, special admin functions) are downloaded and custumised mods for php which are pre-made html sqripts. I made all the logo's/icons/news paper pictures/background images/etc in corel PHOTOPAINT X4 <TIP!> ("uber pimped" paintbrush ;) ) All newspapers and scoreboard content are actually webpages in a i-frame on a seperate URL. Created in WEBDWARF (which even a computer-not can use) I've used this super easy web creation tool for this because its extremely easy to update. Making this update content in a seperate site visible in i-frames allows me to update scores, news etc in no more then 10 seconds. ( for all you guys worrieing about me spending to much time on the site, don't ;p )

So let me first start by saying there are many ways to enjoy X-Com 2000. My opinion however is, there is most fun to be found at a game that is very balanced. The only way to beat the opponent should be to out-smart or out-strategize your opponent. Even when you are behind a well played end game should be able to turn around a match. The luck factor should be out there, but should be as low as possible. This is also a variable wich needs to be controlled if you want players to have long-term fun in playing tournaments. So I set boundries for this. Boundries in the form of rules to make sure a good player ends up high.

Luck is caused by imbalance. The current most used weaponset: ufo2k classic is balanced best but does create imbalance. There are at least three IMBA’s (imbalances) of the game I believe. Please don’t interpret this as I don’t agree that there isn’t any fun in other games then 7K games! 7K games are just a easy and fun way to reduce imbalances.

These are the imbalances wich i decided to control by making 7K game rules:

To control these IMBA’s i set these rules which have evolved in the regular 7K_Rules which are on 7kplay.net

These two rules limit the influence of IMBA’s and makes a good knowledge of the X-com 2000 game a necessity. (Since there are many strategic opportunities with explosives I don’t believe a ban of explosives is an improvement to the game.)

To improve the game and to contribute to UFO2000 fans i also started some other contributions to the community. Since I believe I can make a better balanced weaponset I decided to make a new one inspired by the UFO2000 classic set. This set should increase the balance and has some new weapons which should also improve the strategic posibilities we have as players. I also want to make a new unit just to learn how to. I choose to make a unit wich also improves strategical posibilities of us, the players. Finally i'd like to add a new MAP as a contribution but mostly because I would like a map for the 7k tournaments. All these contributions are a heap of work because of the artwork involved so it will take me a long time. But I have time enough since the project is pretty stationary :). You can follow all the progress in the 7kplay.net forum or in the official UFO2000 forum.

Special thanks to all the dedicated ufo2000 players willing to make an extra effort promoting ufo2000 and 7kplay.net!

[7K] Intri for making UTTO and his constructive critisism.

[7K] XenoSage for organising the WAR and constuctive ideas.

7K_Fomka for being a die hard ufo2000 enthousiast.

<7K> Trolly2 for being a die hard ufo2000 and 7Kplay enthousiast and contributer.

The UFO2000 Development Team for making UFO2000 and keep improving it!