So, this came up: 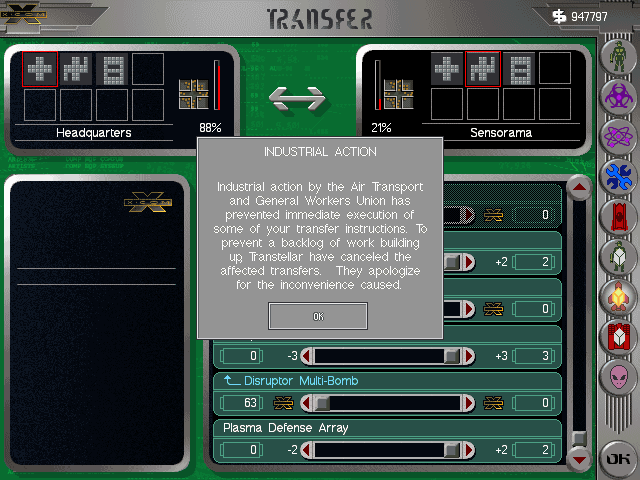 I've never seen it before and I'm out of ideas. Transtellar are reasonably happy, and all three of my bases have adequate road access.

I'm not sure where this idea came from, but after playing XEU for a few hours I was keen to engage my soldiers in conversation. If I'm sending them to their deaths, it's only right that I should treat them like the people they aren't, right?

Here's what I've got:

When WSRMacros is running it has an icon in the system tray. Double-click that icon (it's a blue speech bubble with gears in it) to define a new macro. You need this macro to Send Keystrokes, so click on that. The next window

Here's the list of what I say, and what keys the macro "presses".

I don't say "overwatch" or "hunker down" because for some reason I felt like a dork saying that on my own in an empty room. I don't know what "hunker" is supposed to mean, anyway.

I don't have medikits, grenades, psi attacks and so on in the list because I'm never sure where they're going to appear. You can get to them through voice control by saying "Press 4", "Press 8" and so on.

Note that a couple of these commands require the cursor to be positioned over your soldier to work - opening the door is one of them - as though you were going to click on the soldier.

Give this a try. It's awesome.

In UFO's MAPS directory are a few files that never crop up in the game. What could they be? The files are

I reckon it's possible to get some idea of what these files look like. I reason thusly:

We know that X-Com constructs its map files like this: First of all, the relevant MCD files are strung together, one after another. Each MCD file is a list of objects that appear on the map - all the walls, the doors, the different kinds of floor and the objects that litter the battlescape - trees and gas pumps and tables and the like.

So the game constructs an MCD Array and then treats it like a Chinese menu - I'll have a 55, some 81s and a couple of 108s please, and have you got any of those crispy beef things?

Every MCD Array created by the game starts with the contents of BLANKS.MCD - a simple pair of objects indicating empty space and burnt ground, respectively. Any map tile that appears to be empty in fact contains BLANKS000, and any time you demolish the floor with a blaster bomb, that charred brown patch left behind is in fact BLANKS001.

When constructing the battlescape, the game "orders" items from its MCD Array "menu". Starting from the northwestern tile on the top level, it places the ground, western wall, northern wall and

The fantastic thing is, you don't actually need a menu to order Chinese food. You can just pick some random numbers and you're guaranteed to get SOMETHING. If we assume that these unused .MAP files are intended to work with an MCD Array that begins with BLANKS000, we can extend this assumption a bit - any byte that is 00 can be assumed to refer to BLANKS000, and any byte that is anything else up to FF means there is an object, wall or patch of ground in this tile.

I've created a spreadsheet that takes .MAP data exports from Hex Workshop and shows the arrangement of ground tiles, walls and objects within the map. Grab it here.

Of course, only a complete tool would try to use Microsoft Excel as an art program, right?

The limitations are obvious - while we can tell that there is an object in a particular tile, we have no way of knowing which object to put there. So we can't actually play these maps yet. But at least we can get a rough idea of what they look like.