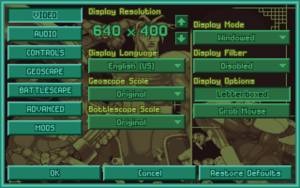 Resolution of the displayed game screen. Use the arrows to scroll through the resolutions supported by your hardware, or click on the numbers to type in your own resolution.

If the game can't detect your hardware resolutions, no arrows are shown.

Controls how the game shows up on your screen:

By default OpenXcom just resizes the screen pixels to fit the resolution, maintaining pixel accuracy as in the original game, but a variety of image scaling filters can be applied to change the image quality or apply smoothing and emulation effects:

*These filters enable OpenGL hardware acceleration. This is required for game capture and overlay software to work, such as FRAPS, OBS, XSplit, Steam Overlay, etc.

To make your own display filter, just write a GLSL screen shader and add it to the data\Shaders folder.

Internally the game is rendered at a specific base resolution and resized to fit your display resolution. The scale changes the size of this internal base resolution, increasing the viewport and allowing you see more of the game at once.