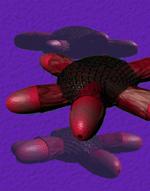 The Vortex Mine, image from the UFOpaedia

The Vortex Mine is the single most powerful thrown explosive in the game, capable of dealing a massive 150 damage in a single explosion. It is also the only weapon in the game that can destroy the orange reinforcement pads in alien buildings. However, it has a very large blast radius, and if used in buildings owned by organizations you would like to remain friendly with may cause slight problems. On the expensive hotel buildings, a single vortex mine can cause an entire section of the glass roof over the alleyways to collapse, annoying the owners and injuring your troopers. However, on the good side, aliens tend to use vortex mines sparingly, perhaps only 1 or 2 per mission, unlike the boomeroids which anthropods will commonly throw 2 or 3 at once. And because it has such a large blast radius and damage rating, it can kill wounded aliens in groups, and severely injure any aliens within the blast range, bringing shields down almost all the way, shaving 2 or 3 devastator blasts off the required amount to kill an alien

The vortex mine is, in otherwords, a powerful but dangerous explosive, that completely outclasses the High explosive, and is great in causing lots of damage to anything within its large blast radius.