The Wolfhound APC is an armored personnel carrier (APC). While most road vehicles should be avoided, the Wolfhound APC is a nice vehicle to use for transporting troops to buildings during multiple-drop invasions in the early portion of the game. Best of all, the first one in your vehicle fleet is free. All Wolfhound APCs are issued with a standard Cargo Module and their engines can be upgraded to the Metro Multipower Plus.

The Wolfhound mounts similar sized weapons as the Stormdog. However, like the Ufopedia entry suggests, these weapons are mainly to allow secure transport than for engaging in battle. The APC has enough equipment space and passenger slots to transport cargo and aliens (with a Bio-Transport Module) while still carrying a respectable crew. This frees up your air vehicles for combating alien ships.

The Wolfhound's slower travel speed often keeps it well out of an air skirmish if it needs to set out before an air battle is over. Nevertheless, take care of it as it only takes one stray shot from an enemy craft to take out the road under it and kill all of its passengers. To ensure no dangerous mishaps like this, it's best to wait until the combat is over before heading out.

1 Armor is given as Top/Front/Left/Right/Rear/Bottom. The in-game Ufopedia rather misleadingly displays only a single armor value, the sum of the values on all six of the vehicle's facings.
2 Top Speed depends on the engine installed.

All cargo modules on new Wolfhound APCs are glitched and only take up 1×1 cargo space. They can only be accessed by its upper left quadrant. Picking up the module will clear the glitched empty space(so be careful cramming Weapon Control Modules there!) and fix the glitch. 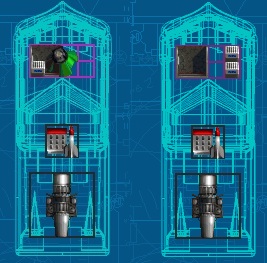